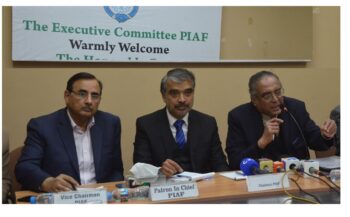 LAHORE: Noted economist and former finance minister Dr Hafiz Pasha has warned that Pakistan inflation can skyrocket to 70% in case of default and if International Monetary Fund’s loan arrangements are successful for the next tranche the inflation will rise to at least 35% owing to its conditions of enhancing energy tariff and levying more duties on fuel.

While addressing the members of Pakistan Industrial and Traders Associations Front (PIAF) here at PIAF Office, Hafiz Pasha observed that overall economy of Pakistan is likely to remain in the environment of severe stagflation in 2023. PIAF Patron-in-chief and FPCCI former president Mian Anjum Nisar and PIAF Chairman Faheem ur Rehman Saigol also addressed the meeting.

If the government implements the key reforms agreed with the IMF, including Rs50 levy per liter on petroleum products, increase in electricity tariff to 40%, doubling of the gas tariff, and shift to market-based exchange rate policy, the rate of inflation could exceed 35% in this situation, he revealed.

And if the government does not implement the agreed reforms it will lead to termination of the IMF program, leading to virtual drying up of capital and absence of foreign exchange reserves to honor the external debt repayment obligations. In this case there will large shortages and a breakdown of economic operations in the country while the rate of inflation can rise to 70%, he added.

The renowned financial expert observed that the artificial exchange rate of the government and over-value of rupee is disastrous for the economy, as the over value of the local currency, which has actual rate of Rs295 against one dollar, has put negative impact on remittances as well as on exports.

Dr Hafiz Pasha said that our reliance on expansive foreign loans has proven to be disastrous, as in first 65 years country’s debt was $65 billion while in next seven years the borrowing was doubled to almost $130 billion, as we enhanced our speed of borrowing foreign loans on high interest rate from commercial banks, that is creating problems in payback.

He said that the government’s reliance on expensive foreign funding continued to rise, as Pakistan’s external debt was primarily increasing because of the government’s inability to enhance exports and attract foreign direct investment. Asking the economic managers to review their irresponsible borrowing behavior, he said the that the reliance on commercial banks continued during past decade, which is more expensive, as without passing through due diligence process the Ministry of Finance started borrowing through foreign commercial banks on short-term basis.

The short-term commercial borrowing was usually obtained at higher rates and without undertaking any due diligence in shape of seeking approval of the cabinet or the Economic Coordination Committee, he added.

FPCCI former president and PIAF Patron-in-chief Mian Anjum Nisar, while addressing the meeting, recommended the government to promote renewable energy and local fuel-based power projects in a bid to reduce the impact of rupee devaluation on energy prices in Pakistan by reducing dependence on imported fuels. Mian Anjum Nisar said that a reduction in energy import bill is a must to narrow down the unsustainable trade deficit and current account deficit, as a share of energy spiked to a record high at 29% in the overall imports worth $80 billion in FY22.

Mian Anjum Nisar said that the current economic situation in Pakistan, marred by rapidly-depleting foreign exchange reserves, has also forced commercial banks to be selective in opening LCs even for sectors such as healthcare, as it has been unable to open Letters of Credit (LCs) as per its usual banking cycle.

PIAF Chairman Faheem ur Rehman Saigol, on this occasion, said that short-term and long-term policies will have to be made to improve the economy. He said that Pakistan is endowed with immense cheap indigenous energy resources including hydel and renewable energy like wind and solar, waste, bio diesel etc. which need commitment to exploit them. He called upon the government to develop an indigenous base of renewable technologies in Pakistan for tapping these energy resources so that country could meet its growing energy needs comfortably.

Faheem Saigol said the country is facing chronic socioeconomic woes due to politically-motivated economic policies, over the time. He said reserves touched the level not sufficient to cover a month imports. All economic indicators are negative. He said that the country’s GDP growth rate is predicted to just 2 percent in fiscal year 2023. Floods caused economic losses reached over $30 billion, while the IMF prescribed measures mostly turned counterproductive.

Responding to a question, Dr. Hafiz Pasha stated that the decision to take more loans will keep complicating the problems in longer term, as the government needs $23 billion in foreign debt repayments for this fiscal year, which is the direct result of such decisions of taking loans from foreign nations.

All the problems of the country can be solved only when the political and economic leadership sit together with good intentions and sincerity to come up with the best economic model to get the country out of the current financial crisis, he urged.

The former finance minister pointed out that circular debt has reached over Rs 4.17 trillion and has put Pakistan’s energy security at a heightened risk. Pakistan’s power sector circular debt has spiked to an alarming level of Rs4,177 billion as the government fails to stem system losses. The circular debt of the energy sector is rising at the rate of about Rs129 billion per year. The government paid around Rs15 billion to the power sector during last fiscal year which is more than the defence budget of Rs1430 billion, as the sector has become a black hole for the country, despite the continuous increase in the prices of electricity and cut in subsidy.

Dr. Hafiz Pasha said that the non-issuance of letters of credit (LCs) is crippling industrial activities, leading to massive unemployment as the industry is unable to import the raw material necessary to keep their manufacturing wheel running. He stated that the emerging situation has terribly affected industrial activities as well as exports, which would have a devastating impact on the already ailing economy and the lives of millions of poor people due to massive layoffs.