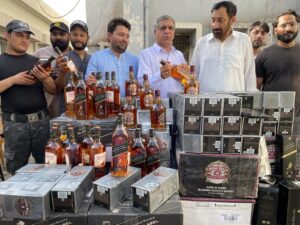 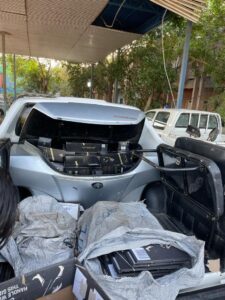 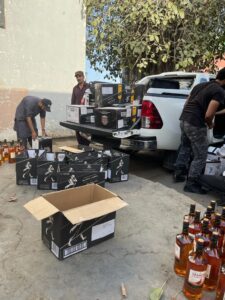 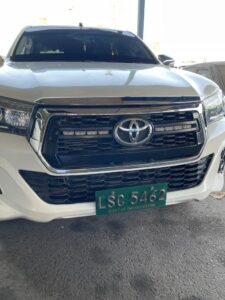 An information was received through Collector Customs Enforcement Karachi Feroz Alam Junejo to Additional Collector Honak Baloch that liquor was being smuggled into Karachi from Balochistan in the cover of official vehicles.

Acting on this, Deputy Collector Inamullah Wazir mounted vigilance at customs Moachko Checkpost. Meanwhile a vehicle with official number plate with an armed guard and driver was spotted at the check post.

When signaled to stop the vehicle sped away. Resultantly, it was chased by customs anti-smuggling staff. The vehicle deliberately started hitting customs mobiles and the guard resorted to firing.

Customs staff restrained from opening fire as the road was crowded and there was threat to public safety. Near sher shah chowk, the driver and guard jumped off the vehicle ran away taking benefit of traffic jam on the other-side of the road.

Upon proper search of the vehicle, around 348 liquor bottles were recovered valuing Rs6.48 million. Value of the total seized goods including vehicle is Rs10.48 million. FIR has been lodged and the accused are being traced.

An official said smuggling and transportation of smuggled liquor had increased ahead of the Eid-ul-Fitr. The official said staff of certain embassies and consulates were involved in illegal import and distribution of liquor in the country.