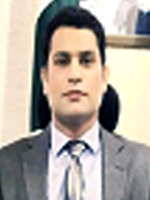 Economy plays a vital role for the development of any country. A plethora of problems which inflicted many a dent and deformity in economic growth of the nation needs to be identified and corrected. One of the panaceas to treat the ill economy is providing safe and secure business environment in international trade. We are supposed to review our existing scheme of things and set new roles with a view to achieving economic goals and contributing towards thriving business activities. Since business has direct relation with security, therefore, an all embracing security is prerequisite for substantial and consistent economic growth specially when a battalion of corrupt practices engulfed the ailing economy in a quagmire of terrorism viz-a-viz  asymmetrical balance of trade and payment. In this grim scenario, the role of Customs authorities is of prime importance in order to bring about positive economic boom.

The rapid and efficient clearance of goods increases the participation of domestic firms in the global market and can have a significant impact on the economic competitiveness of nations by encouraging investment and industry development. It also allows more small and medium-sized enterprises to participate in international trade. The commitment to implement the WTO Trade Facilitation Agreement (TFA) could result in major administrative, technical and infrastructural constraints. Indeed, Customs administrations, the mainstay of the implementation of the agreement, are in a material, human and institutional situation that gives them little opportunity to perform efficiently their trade facilitation mission. Customs controls have recently been assigned a new purpose of security with the implementation of new provisions, in application of the SAFE standards recommended by the World Customs Organization to secure the flow of international trade.

In cyberspace, commercial exchanges are made exclusively on the basis of depersonalized relationships, and often, anonymously. Payments are no longer made in currency guaranteed by a State. Indeed, customers pay for  their purchases in a multitude of new virtual currencies, of which Bitcoin is the best known. Moreover, in this illicit trade, the very concept of merchandise has changed, and it is often dematerialized goods, which cannot physically pass from hand to hand. The most dangerous traffickers buy goods based solely on algorithms, such as malware, Trojans, botnets, ransomware and spam made available by malicious sellers in both developing and developed countries. The losses associated with these intangible products today represent considerable amounts.

It is in the field of environmental crime that the illicit trade is experiencing its strongest growth. As the planet’s resources dwindle and the world’s population continues to grow, the resources needed to survive are under increasing pressure. Both illegal trade actors and corrupt officials benefit from the planet’s limited resources and exploit the market demand for endangered species, including rhinoceros horns, elephant tusks and protected tree species.

As part of its specific control tasks in the field of safety and security of air and port cargo, Customs is in charge of the prevention and it aims to secure international flow of goods. In addition, Customs is directly involved in the fight against the proliferation of weapons of mass destruction through the Container Security Initiative (CSI) program and the Proliferation Security Initiative (PSI). Pakistan Customs, like Customs of developed countries, strives hard to provide secure and safe business environment to the country by using a seamless and automated Custom clearance system for trade. Pakistan Customs has implemented a homegrown solution through WeBOC System i.e. the Web-based One Customs System (WeBOC). All the goods are tackled here with a robust Risk Management Unit which gets activated immediately on the basis of risks parameters incorporated in the system wherever and whenever system protocols are violated.

In a world where demand drives up prices and shortages often contribute to the growth of illegal markets and the black market, illicit trade results in the depletion of natural resources. To bring about such a change requires much more than a change in trade regulations, it also requires control of the world’s population and the pressure it exerts on the balance of the planet. There is a need to rethink the financial system in order to provide more transparency, restructure the corporate world to focus on accountability and put in place anti-corruption measures to combat those who promote illicit trade. We must find the means to control the harmful non-state actors that are the big winners of the globalization of trade.

Taking advantage of these opportunities will enable Pakistan Customs to protect the fiscal and financial interests of the state, protect national economies from the illicit movement of goods, support the international trading system by ensuring a level playing field for all businesses to facilitate legitimate trade and protect society. The benefits of an adaptable Customs administration, focused on strategic objectives, are immense and in particular make it possible for lawful companies to reduce the costs related to the legislation, to target in a more efficient and profitable manner high-risk goods and to establish among Customs administrations a climate of trust and mutual recognition of each other’s programs and controls.