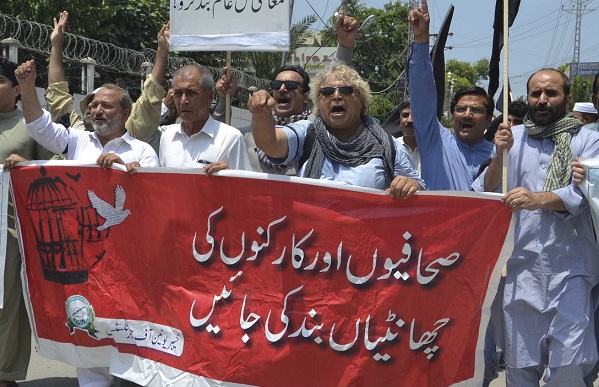 KARACHI: In 2020 Pakistani media was confronted with the unique new challenges both in terms of content to cover as well as in the nature of the measures to restrict press freedom and the free flow of information in the country.

The year presented the media with the challenge of covering the spread of COVID-19 while also ensuring that the safety of media workers.

According to the annual report on press freedom produced by Pakistan Press Foundation, 2020 also saw more aggressive forms of censorship being enforced in the country. Social media content became increasingly subject to policing with the development of policies to regulate content as well as with the registration of cases against media workers for their posts on social media.

Alongside this, press freedom continued to be threatened with journalists being abducted, killed, arrested, and manhandled with impunity.   Women journalists were subjected to threats and harassment online highlighting the gendered nature of attacks on press freedom.

In 2020, with the spread of COVID-19 claimed the lives of many media workers in Pakistan and infected numerous others. It presented a challenge for newsrooms in terms of implementing the required standard operating procedures to ensure the safety of their staff, often at the frontlines in covering the spread of the virus.

In terms of coverage of developments regarding COVID-19, journalists had to work with data regarding the spread of the virus as well as work within the guidelines of coverage that had been developed by government authorities. There were instances of journalists being arrested for their coverage of a quarantine centre.

While the coronavirus was a new frontier that the media had to deal with in 2020, in many other ways the challenges faced by the Pakistani media and the restrictions on press freedom have not changed. In one instance a journalist was killed during the year. In other instances, journalists continue to be arrested, injured and manhandled.

On February 16, KTN news and daily Kawish journalist Aziz Memon’s body was recovered. A joint investigation team regarding his death in May said it was a “well planned murder”.

During the year, in perhaps the most high-profile arrest of a media worker, Jang and Geo Media Group Editor in Chief Mir Shakilur Rehman was arrested by the National Accountability Bureau (NAB) in March. He was later shifted to jail. Eight months later, in November, Rehman was finally granted bail.

In 2020, a sense of fear and insecurity amongst the media grew with at least two reported instances of journalists being picked up and disappeared for multiple hours. Senior journalist Matiullah Jan was abducted from Islamabad in July in October, Geo News senior reporter Ali Imran Syed went missing.

When journalists were not physically harmed, they were threatened. Following a story regarding the business assets of Lieutenant General (Retired) Asim Saleem Bajwa, investigative journalist Ahmad Noorani received life threats.   In other instances, a publishing house as well as the Karachi Press Club were raided, further creating a sense of fear.

2020 also saw increased policing of content on social media with rules developed to control content that can be shared on these platforms. The temporary ban on video sharing application, Tik Tok, was a demonstration of this shrinking space for free expression on social media, which is generally considered to be a more open and accessible source of content sharing. In November, social media rules were notified thus further reducing the space for criticism, debate and discussion online.

The media felt the impact of this policing of social media with criminal complaints registered against media personnel for social media posts that were considered to be objectionable due to their criticism of the state. Criminal complaints were registered against former Pakistan Electronic Media Regulatory Authority (PEMRA) chairman Absar Alam, Express Tribune News Editor Bilal Farooqi and journalist Asad Ali Toor.

On the broadcast media front, this year PEMRA provided numerous directives that made it impossible for news outlets to present a complete story to their viewers. By blocking entire sections of coverage such as the ban on speeches by absconders, news outlets are unable to cover current events taking place in the country.

During 2020, the media in Pakistan has come under attack on all fronts — from adapting to the challenge of covering the pandemic to working within an increasingly restrictive space for free expression and press freedom.

The safety of the media has come under threat and as the space for free expression shrinks, both online and in traditional media, journalists are forced to adapt to this environment. The lack of accountability for crimes against the media, the new fronts of creating rules for monitoring content and the aggressive methods of silencing dissent, create an environment of fear and censorship.