baseH Tech raised funding at a historic valuation of over $4.0 million at seed level, which is one of the highest in the AI/Tech space in Pakistan so far. 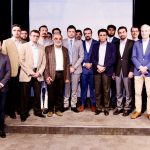 Elahi Group of Companies, led by CEO Danish Elahi is the prime partner of this cutting-edge AI company.

The investment agreement signing ceremony took place between baseH and Elahi Group of Companies at NIC, Karachi, where the start-up is being accelerated.

“I am greatly overwhelmed by the response our AI-driven advisory and other bespoke verticals for media/AI-driven social media management/AI-smart assistants are getting from all across the board. I have a sanguine hope that we are going to transform the key industries not only in Pakistan but at a global level, and the seed has been sowed,” Khurram Shahzad said.