ISLAMABAD: The Federal Board of Revenue (FBR) has attributed 0.4 percent growth in tax-to-GDP ratio to 8.9 percent in fiscal year 2013/2014 from preceding fiscal year’s 8.5 percent to government reform agenda despite the fact the revenue collection was below the target despite downward revision two times. 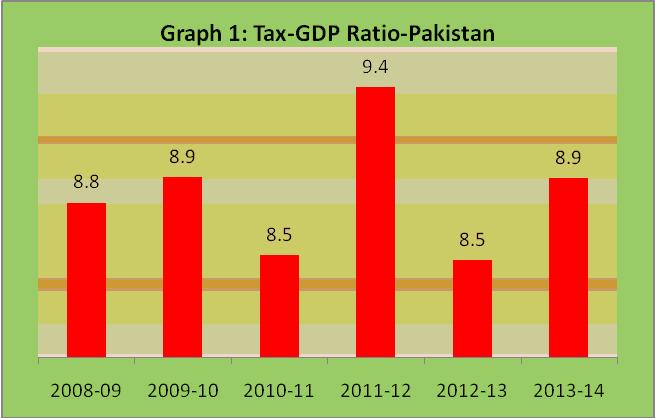 In its biannual review for January to June 2014 released on Friday, the FBR said that Pakistan’s economic growth over the past many years has suffered a number of setbacks; worsening security situation and crippling energy crisis.
However, a number of deep structural problems that have persisted for decades are also to be blamed; the country weak financial position rooted in low tax revenues on one hand and limited export growth on the other; grossly insufficient investment in human capital development, infrastructure and economic activity at large, the review said. “While external shocks have also adversely affected the economic performance. The noticeable decline in the rate of growth is a consequence of policy choice. The long term annual growth rate appears to have declined and at present is just 4 percent,” it added.
The revenue body said that Pakistan has to focus on resource mobilization efforts. There is broad agreement amongst the economists that in a situation like Pakistan a steady rising tax to GDP is the best guarantee of viable fiscal adjustments and sound finances- a desired goal that has been missed for decade.
As far as revenue collection is concerned FBR has collected Rs2,266 billion as provisional collection during the outgoing fiscal year 2013-14 as against Rs 1,946 billion during 2012-13. Thus, a positive growth of 16 percent has been attained.
As a result, the Tax GDP ratio has enhanced to 8.9 percent from 8.5 percent which itself a significant indicator of the government reform agenda. However, the target of Rs 2,275 billion has been achieved to the extent of 99 percent.
It may be recalled that FBR was allocated an ambitious target of Rs 2,475 billion for FY: 2013-14. The target was based on the assumptions that FBR revenue collection would be Rs 2,050 billion during 2012-13 (Base year) and high trajectory growth of macroeconomic indicators forecasted for FY 2013-14. On the contrary, the base year collection stood at 1,946 billion. Thus, the revenue base was eroded by Rs 104 billion. “The correction was made accordingly and the target was reduced to Rs 2,345 billion and further corrected to Rs 2,275 billion during the year,” the review said.
Major share goes to sales tax i.e. 44 percent, followed by direct taxes 39 percent, customs 11 percent and FED 6 percent in FY 2013-14. 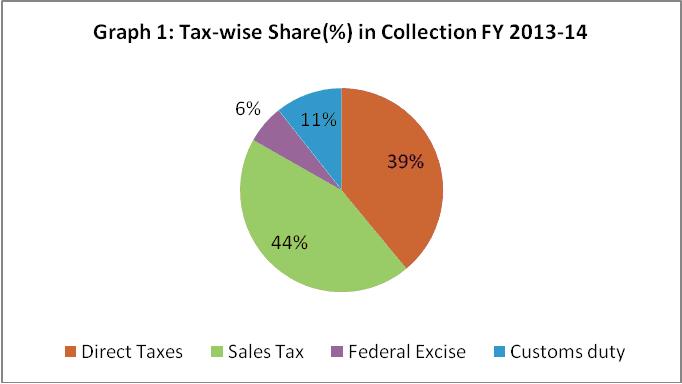 In total collection of Rs2,266.3 contribution of direct taxes has been Rs884.1 billion with 18.9 percent growth. The growth in the collection of sales tax has been 18.5 percent, customs only 0.6 percent and FED by 15 percent.
In absolute terms, Rs319.9 billion higher amount has been collected as compared to FY 2012-13.
Performance of direct taxes and sales tax has been excellent as Rs140.7 billion and Rs159.6 billion additional amount has been collected during FY: 2013-14 respectively. Under the head of FED, Rs18.1 billion higher revenue was realized whereas customs duty fetched just Rs1.5 billion additional amount as compared to last fiscal year.
The share of direct taxes in total federal taxes has increased from 38.2 percent in 2012-13 to 39 percent in 2013-14. Similarly, share of sales tax has also increased from 43.3 percent to 44.2 percent. On the other hand, share of custom duty has declined from 12.3 percent in 2012-13 to 10.6 percent in 2013-14.