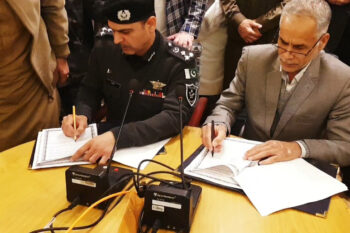 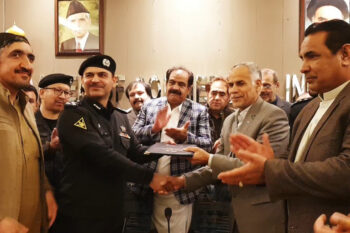 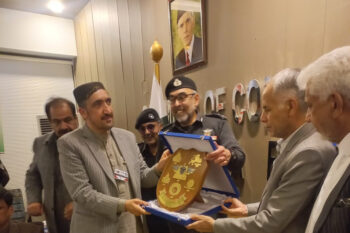 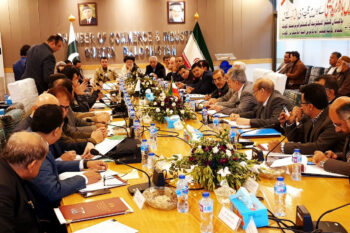 QUETTA: The 10th meeting of the Joint Committee on Border Trade between Islamic Republic of Pakistan and Islamic Republic of Iran was held on 13th and 14th, January, 2023 at Quetta, which was attended by the nominated delegates of both the countries.

The main emphasis during the meeting was to improve mechanism of mutual understanding to facilitate and enhance bilateral trade and transport, improve economic relations between the two brotherly countries, and to ensure cooperation in various fields such as tourism, fisheries, mines and minerals etc.

In continuation of bilateral negotiations, the 10th meeting agreed that Joint investment shall be made by Zahidan Chamber of Commerce Industries, Mines and Agriculture (ZCCIMA) and Quetta Chamber of Commerce and Industry (QCCI) for providing the required infrastructures in customs, trade, transportation and airline sectors.

It was mutually agreed that matters shall be taken up with the relevant authorities to increase the number of items included in the Preferential Trade Agreement (PTA) signed between Pakistan and Iran and to reduce tariff between 30 to 70 percent.

It was agreed that both the countries will take necessary steps to diversify and enhance the bilateral trade to achieve the goal of $5.0 billion annually and also try to achieve balance of trade.

It was agreed that obstacles in the way of implementation of Barter Trade shall be resolved through mutual consultation between both the Chambers (QCCI & ZCCIMA).

It was agreed that an additional border crossing point shall be opened at Kohak-Panjgoor/Chidgi region in order to increase bilateral trade.

It was agreed that recommendations shall be given to higher authorities for establishment of new joint border markets at Mirjaveh-Taftan (first priority), Jalgh-Mashkel (second priority) and Shamsar (third priority) after approval of relevant authorities and identification of exact locations by the joint technical team.

It was also agreed that efforts shall be made to enhance the working hours to 24 hours by the end of May 2023. It was agreed that both sides shall take necessary measures to establish related offices at both sides of the border at all agreed border markets.

It was mutually agreed that efforts shall be made by both sides to reduce import tariff on fresh fruits through bilateral negotiations with relevant authorities.

It was informed by Pakistani side that multiple and six (6) months visas for Iranian drivers are already being issued by the Pakistani Consulate at Zahidan on the recommendation of Iranian transportation companies. However, both sides shall consider increasing the duration of transport visas to drivers up to nine months on the principle of reciprocity. Both sides further agreed to review the visa fees structures to bring parity and reciprocity.

Iranian side urged Pakistani side to expedite inauguration of new border gate at Mirjaveh-Taftan, while Pakistani agreed to expedite the process and report progress within due course.

Iranian side informed that Iran is ready to accept cash money, machineries and other commodities for mutual joint investments. Both sides agreed to provide investment information services to investors through diplomatic missions of both countries.

Pakistani side informed inter-ministerial consultation is being done for finalizing the MOU regarding joint use of Miejaveh-Taftan border gate, and final text of MOU shall be shared with Iranian side through diplomatic means.

Pakistani side informed that Quetta Chamber of Commerce and Industry shall urge the LPG importers to dispatch sufficient number of ISO tanks for transportation of LPG which is one of the main export item to Pakistan from Iran.

Both sides agreed in principle to develop maritime clearing stations at Pasabandar in Iran and Jiwani in Pakistan for bilateral trade.

Pakistani side informed that Aviation Regulatory Authorities of both countries are engaged to broaden the aviation cooperation in many sectors including the increasing of number of airlines and frequency of flights and bilateral investments in airport infrastructures of both countries.

Pakistani side informed that necessary infrastructure has already been established at Taflan border and NLC Quetta for drivers, while infrastructure development of shelter facilities is in progress for remaining three identified locations, Noshki, Yakmach and Padag for ensuring smooth traffic of loaded trucks.

Pakistani side informed that MOU on ferry service with Iran is being finalized and the same shall be shared with Iranian side after completion of codal formalities.

Pakistani side informed that number of railway wagons for freight transportation shall be increased upto 500 on completion of bridge at Hirok before the end of June 2023. considering increased demand of the traders.

Pakistani side informed that Pakistan Railways shall send its Divisional Mechanical Engineer and its team to Zahidan to provide technical assistance to Iranian side to assemble bogie locomotive brake system within one month.