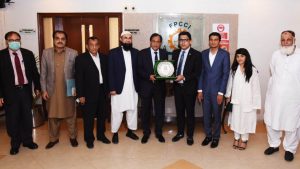 Karachi: (PR) Mian Nasser Hyatt Maggo, President FPCCI was pleased to receive Mr. Farman ullah Zarkoon CEO Baluchistan Board of Investment and Trade (BBIT) along with his team at FPCCI Head Office to discuss the related matters of trade bodies as to how the FPCCI can act as a bridge between BBI&T and Trade Bodies in setting up various industries in the Baluchistan. There was an exchange of views on the subject between participants and CEOs team during the meeting in addition to the Question Answer session.

During the presentation by CEO, BBIT he informed that the Baluchistan Board of Investment is working for ease of doing business in the province for the local and foreign investors. BBI&T was established in 2010 and is working on almost all sectors such as minerals etc. where development economy is existing.

For this purpose two economic zones are being setup in the Baluchistan and CEO, BBIT is the focal person regarding infrastructure such as electricity etc. NEPRA Laws are relaxed for this purpose in Faisalabad and now electricity can be produced by the zones specified for the purpose through captive power plants.

It is not out of place to mention the presence of Chinese investors in the province who are working on captive power plants in Lasbela, Hub Chowki etc. these plants can generate their own electricity and extra electricity will be consumed in Baluchistan by various industrialist projects.

CEO, BBIT informed that the businessmen interested to establish industry will be provided, land by the BBI&T. They have established the Hub Zone where there are two phases (Phase-I & Phase-II). The industries can be setup on private, public, and Public Private Mode etc.

At the moment 205 acres of land is  allocated for  Hub Zone and 200 acres to Bosan Zone which is 20km from Quetta. It is informed that SSGC has started to lay down pipes for the gas infrastructure. When these zones are fully operational we will get connected

to Azerbaijan via Afghanistan to boost up the trade. As far as Karachi is concerned  BBIT has setup a local office in Defence Phase-8 for the ease of Karachi based trade bodies.

During the Question & Answers session participants discussed on Zone enterprises, Admission and sale of plot regulations 2020. The CEO BBI&T concurred with the concerns of SEZs that there is need to review the strict regulations as they are reducing the chances of successful implementation of SEZs. The shifting of allotment from developer to BOI portal comes in the way of desired development of Special Economic Zones by marginalizing role of developer in public sector companies in development economic zones companies.

Mr. Nasir Khan, VP FPCCI inquired about the possibility of purchase of  land privately. CEO replied it could be possible. He further added that tire plants of China are awaiting for re-allocation in these zones. It is also an edge for the chambers in Pakistan that they can purchase land for their own zones. In future we might be getting cheap electricity from Iran as Chabahar industrial zone is near Gabd border with Iran  in the vicinity of Gawadar.

CEO, BBIT proposed that he can contact the Chabahar Authorities for signing of MoUs if required. Another development is that the Chaman Terminal being built for the purpose and will be operational soon. He invited the FPCCI President and Management to visit Chaman/Gawadar.