According to details, several importers including M/s Ahsan Traders approached the Directorate General submitted that the Valuation Ruling 908/2016 enhanced the values of mobile accessories unilaterally and illegally, in some cases the values had been increase by over 900 percent.

Electronics Goods Importers Association Lahore and Pakistan Electronic Merchants Association Karachi emphasized that the impugned items were highly smuggling prone goods. They claimed that owing to this valuation ruling survival of importers was at stake, as amount of duty and taxes per container had increased more than four folds.

They also alleged that the market survey conducted by the department was irrelevant as it was conducted from retailers, whose profit margins are normally exorbitant especially in this line of business.

They, therefore, requested that the survey should be conducted from wholesale market. They also agitated that after issuance of valuation ruling No.374/2011 of mobile batteries, the legal imports of mobile batteries substantially decreased. They also stated that the department had taken average of mobile accessories whereas, in Pakistan primarily low quality mobile accessories are imported which are much cheaper than the branded and better quality accessories.

The department, however, defended its position by claiming that repeated market surveys were conducted and samples of different accessories were actually bought. The department claimed that all types of mobile accessories were abundantly available in the market, and importers’ claim regarding only lowest category imports was factually incorrect.

The department also contended that online values were obtained from different suppliers which verifies department’s stance that values determined vide impugned valuation ruling were based on averages taken from lower end mobile accessories.

After detailed deliberation of the case, Director General  observed that keeping in view that no direct evidences of transaction values are available or verifiable, the working presented by the importers, and the results of re-surveys from the whole sales markets, the customs values of low end brands of Chinese origin of the impugned Valuation Ruling No.908/2016 are re-determined. 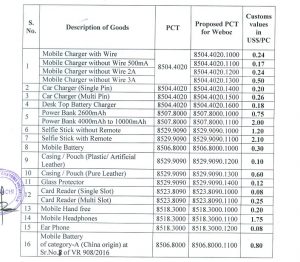