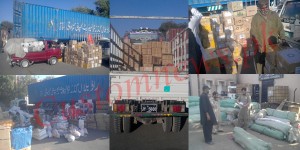 KARACHI: MCC Preventive Anti-Smuggling Organization has seized goods worth millions of rupees in five different cases and arrested two persons. All these operations were carried out on the information of Assistant Collector Syed Mohammad Raza Naqvi who is a competent and dedicated officer.

According to the details, a trailer coming from Multan to Karachi was intercepted at toll plaza and recovered plastic goods, electronics appliances and computer accessories etc worth Rs35 million. It is interesting to note that a 40-ft container had been modified into a 50-ft container.

It is being investigated that whether goods found were of Afghan Transit Trade, which were pilfered and coming back to Karachi or it was smuggled from Afghanistan or it was some transshipment consignment which was being illegally moved.

In the case, ASO raided the office of M/s Deltex Courier and recovered smuggled cell phones worth millions.

Moreover, ASO seized smuggled Indian fabric worth Rs8.0 million from a truck. The action was taken on an information.

Further, a warehouse in Karachi SITE was raided and motorcycle auto-parts worth millions of rupees were recovered.

In another case woolen garments for kids smuggled from Iran were seized. Acting on an information a vehicle was intercepted at M.A Jinnah Road and goods were taken into custody.

As Collector Preventive Tariq Huda is pursuing a rigorous campaign against smugglers and different teams have been formed headed by Assistant Collector Mohammad Raza. Since January, ASO of Preventive has made cases worth over Rs300 million.

Sources said that these are special purpose buses and used only for smuggling purpose. There are no seats in these passenger buses and these are stuffed with smuggled goods. Around 8-10 such buses carry non-duty paid goods into Karachi from Quetta causing a revenue loss of Rs70-80 million daily. Despite the fact that these passenger buses have no seating arrangements and are used exclusively for smuggling, the Customs Adjudication releases these carriers. An official said a policy is needed that these transportation means should be confiscated.