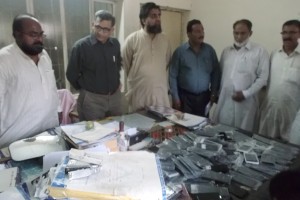 KARACHI: The Anti-smuggling Organization (ASO) Hyderabad has seized a large quantity of mobile phone sets smuggled into the country worth Rs13.3 million.

According to details of the case, information was received regarding transportation of foreign origin smuggled “Mobile Phone Sets” from Abbotabad towards Karachi through a Bus of M/s Daewoo Coach Bus Service Abbotabad-Karachi.

The driver of the said Bus was asked to produce any documentary evidence of the above recovered foreign origin goods, but he failed to submit any evidence, therefore, the Incharge Pakistan Rangers Tool Plaza Jamshoro and Khair Muhammad Inspector, ASO, Hyderabad both officers examined the goods and found the recovered goods foreign origin were smuggled.

In absence of lawful/import documents, the goods were seized and deposited in the State Ware House, MCC Hyderabad, which will be finally assessed at Appraisement Section Custom Dry Port, Hyderabad.

The case is submitted for adjudication please.