KARACHI: The Directorate General of Customs Valuation has revised the Customs values of Polyester yarns of different deniers vide Valuation Ruling No. 673/2014 for assessment of duty/taxes on these yarns when imported into the country.
Earlier Valuation Ruling No.461/2012, was issued in line with international price trend at that time. The importers have been contesting that Yam value in international market especially from China has significantly decreased whereas clearance formations are assessing imported Polyester-Yarns of different deniers in terms of Valuation Ruling No.461/2012, which is much higher than existing international prices, which prompted an exercise to re-determine customs values of the same.
The polyester yarns of different deniers would be assessed to the duty/tax as per the following schedule. 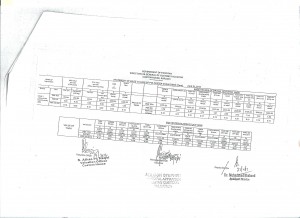