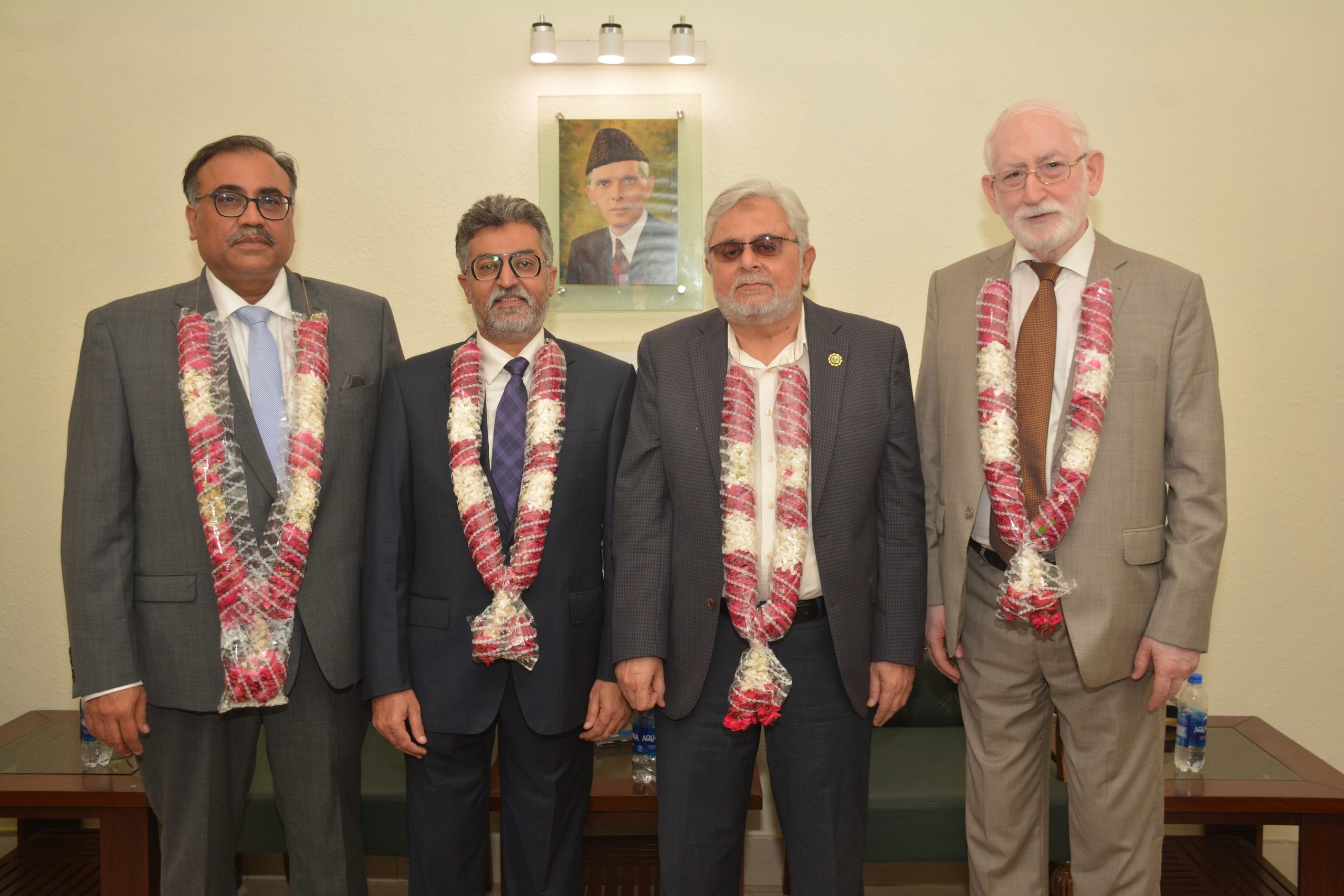 KARACHI: Chairman Businessmen Group (BMG) & Former President Karachi Chamber of Commerce & Industry (KCCI) Zubair Motiwala has fervently appealed the federal and provincial governments to pay special attention to the woes of Karachi which has largely been ignored by both the governments that resulted in further worsening the already awful infrastructure all over Karachi where the roads, sewerage and rainwater drainage lines have totally wrecked and the city faces severe gas, electricity and water shortages.

Speaking at the 60th Annual General Meeting (AGM), Chairman BMG said that not a single civic service was properly available in Karachi which are usually available in any other cosmopolitan city of the world yet this city continues to contribute 67 percent revenue to the national exchequer while more than 55 percent of the total exports were also proceeding from Karachi.

“Karachi is usually compared with Mumbai but the local Government of Mumbai receives a huge budget of Indian Rs436 billion whereas Karachi, despite being a more complex and widely spread city, receives a meager amount Rs52 billion only”, Chairman BMG said and asked, “How is this city going to progress, compete or even survive with such a small budget?”

He particularly stressed the need to construct the Karachi bypass, which must connect Karachi Port with Lyari Expressway and Northern Bypass so that all the heavy vehicles heading towards the upcountry could directly land at the highways without touching the city’s roads.

Underscoring the need to modify the ineffective taxation policies which keep the highest earners who pay the highest taxes deprived and distressed, Zubair Motiwala feared that implementation of Tax Laws (Third Amendment) Ordinance 2021 would start from Karachi as it has been observed from time to time that all such laws carrying penalties always start from Karachi. “If Karachi has to pay all the taxes and suffer penalties as well then why Karachi was not receiving development funds in proportion to its contribution”, he added while reiterating KCCI’s demand to change the term ‘under-filers’ in the controversial ordinance with ‘non-filers’.

Expressing deep concerns over the likely gas crises during this year’s winter season, Zubair Motiwala informed that the Karachi Chamber has invited Federal Minister for Energy Hammad Azhar at a symposium on Gas Crises in which experts will also be invited to share their point of view and a presentation highlighting all the facts and history will also be delivered with an intention to explore and agree upon a practical mechanism for efficiently dealing with gas crises during this year’s winter season. “Statistics of the last 10 years clearly indicate that gas demand by industries in Karachi remains stagnant in between 385 to 400 mmcfd yet it was these industries which suffer the most during winter season, not because of increase in their demand but due to rise in demand by domestic consumers in Sindh and Baluchistan.”

He said that 10 million jobs declared by Prime Minister Imran Khan cannot be provided by the government alone but it was the private sector of Karachi which, being the engine economic growth, would generate all these jobs which will only be possible when Karachi is fed adequately and all its issues were given special attention.

Commenting on the miseries and hardships being faced since the outbreak of covid-19 pandemic, he said that small traders, shopkeepers, restaurants, marriage halls and saloons etc. have suffered grave losses due to frequent lockdowns and were still battling for survival. “KCCI has been constantly seeking relief but it was really unfortunate that we stand unheard to date. These are challenging times and every member of the civil society is facing problems due to COVID crises. Perhaps, it is time when the government should think about extending monetary help to citizens especially the small shopkeepers by pardoning payment of electricity bills and taxes etc.”, he added.

While paying glowing tribute to Late Siraj Kassam Teli for his matchless services and also appreciating the splendid job done by the outgoing office bearers, Chairman BMG said that stepping down from office bearers’ position was not the end for retiring President Shariq Vohra, SVP Saqib Goodluck and VP Shamsul Islam who will have to keep on dedicatedly serving the business community as BMGIANs for continuity of all the initiatives and projects undertaken during 2020-21. “Thanks to the honesty, vigilance and dedication of outgoing office bearers, KCCI’s income during 2020-21 recorded an increase of Rs8.4 million despite substantial reduction in the income generated through visa recommendation letters, attestation and all other services which became possible due to digitalization of Chamber’s services that led to achieving the highest membership of 25,000 plus.”

Chairman BMG urged the newly elected office bearers to make extraordinary efforts and strive really hard to surpass the benchmark set by the outgoing office bearers who worked very well but it was still a long way to go towards a stable, prosperous, peaceful, wealthy Karachi in particular and Pakistan in general.

Vice Chairman BMG Haroon Farooki, while terming the Tax Laws (Third Amendment) Ordinance 2021 as black and blind law, stated that this issue has to be raised on all Pakistan basis and KCCI should take lead by summoning all Pakistan Chambers’ Conference so that the entire business community could compel the government to withdraw this ordinance which would give unbridled powers to FBR.

Vice Chairman BMG Jawed Bilwani said, “If an ailing Karachi contributes so enormously to the economy, what will be the size of its contribution if attention is given to make it healthier. Both, the federal and provincial governments, will have to realize that ‘Karachi is actually Pakistan’ which must receive due attention otherwise all the economic agonies being faced by Pakistan would remain as they are. We will have to stand up and fight for the rights of Karachi.”

The newly elected President KCCI Muhammad Idrees, in his remarks, vowed to carry forward the mission Late Siraj Kassam Teli who dedicated his entire life to not only serve the business community but all the Karachiites under BMG’s policy of public service.

Pledging to carry on all the initiatives taken by his predecessor, Muhammad Idrees said that rigorous efforts will be made to further improve the working of Karachi Chamber through teamwork. “I’ll be working hard to deal with numerous economic issues and the problems being suffered by the business community due to volatility in dollar-rupee exchange rates, gas, water & electricity crises, customs & taxation related issues etc.”, he said, adding that individual issues will not be taken into consideration but only general issues being faced by majority of the business community will be taken up with concerned quarters.

Muhammad Idrees said, “We will use all options and utilize all available platforms to raise a strong voice for resolving the issues being faced by Karachi which has been receiving step-motherly treatment. We will oppose all anti-business policies but warmly welcome and fully support all those initiatives taken by Prime Minister Imran Khan and his aides which are in the larger interest of the country and the business community.”

“The government has to prioritize and work seriously on ‘Charter of Economy’ which is desperately needed as Pakistan is currently overburdened with debts and facing a lot of challenges so we have to come up with a mechanism in consultation with business community to pull the country out of crises”, President KCCI said, “The loyal taxpayers must be appreciated and given facilities whereas strictest action has to be initiated against individuals who have been living luxurious lives but not paying taxes.”

Earlier, retiring President KCCI M. Shariq Vohra also paid glowing tribute to Late Siraj Teli and highlighted all the achievements along with some major milestones attained by the Chamber during 2020-21. He also assured all-time availability as a humble BMGIAN to the new office bearers for further improving the operations and image of KCCI.