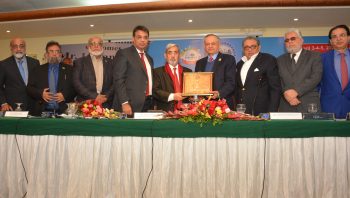 “The tariff setting authority has shifted to Ministry of Commerce and Industries from the Federal Board of Revenue (FBR), and now the import tariff would be part of industrial policy and not the revenue policy,” the advisor said.

He said a rational policy was being prepared for the last three months with the input of business community, and it would be presented along with the upcoming budget. “Cost of raw material is higher. Wait till upcoming budget and you would see these costs would come down,” Dawood told the businessmen.

He said there was a lot of mess and it would take at least two budgets to straighten things up. He also highlighted mis-declaration and under-invoicing by importers, which caused a revenue loss of $4.0 billion last year.

The advisor admitted the gross misuse of Afghan Transit Trade (ATT) had caused much loss to the national economy as a large number of transit consignments were either pilfered during transit or the goods were smuggled back into the country.

“The transit trade agreement is expiring in 2021, and then it would be revised accordingly. We have proposed to fix a quantity restriction on Afghan imports, as well as collection of duty and taxes by Pakistan’s authority on all ATT imports, which would be transferred to Kabul just like India does to Nepal.”

Talking about the improvements, he said economy was getting better as current account turned surplus, fiscal deficit came under control and foreign exchange reserves shored up. He also informed that there was significant growth in meat, poultry and seafood exports. “Around 60 tons of seafood is being exported to Western China alone every week,” he cheered.

Earlier, the business leaders ridiculed the Prime Minister Imran Khan’s claims that the year 2020 would be a year of growth saying that given unavailability of utilities, higher cost of doing business and exchange rate uncertainty, there could be no business expansion and export enhancement.

“There has been no industrial expansion in years, and without surplus production, one cannot expect increase in exports,” Chairman Businessmen Group Siraj Qasim Teli said.

President KCCI Agha Shahab said import duties in Pakistan were way higher than competitors in the region, which need to be rationalized. “Due to the excessive duties, the legal imports were declining while there was a massive surge in smuggling,” Shahab said adding that there was 44 percent increase in Afghan Transit Trade (ATT) last year alone.

The business community also urged the Advisor to ensure early release of stuck up refund claims.