Seminar held on transparency and accountability in construction industry

Seminar held on transparency and accountability in construction industry 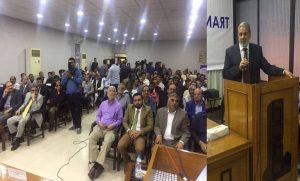 KARACHI: An interactive seminar was organized by Association of Builders and Developers (ABAD) Karachi today on "Transparency And Accountability For Improvement of Construction Industry In Pakistan". It was attended by dignitaries from various fields including Government functionaries, builders and developers. DG NAB Karachi Lt. Col (R) Siraj ul Naeem was the chief guest of event, while Mr Ghulam Qadir Thebo Chairman Anti-Corruption Establishment and Mr. Muhammad Asim Khan Director FIA Sindh also participated in the seminar. Lt Col (R) Siraj ul Naeem DG NAB Karachi while addressing the seminar highlighted the  role of ABAD and said that all small as well as large builders and developers be made part of ABAD so as to ensure proper regulation. DG NAB Karachi said that one window operation is a long due demand by the builders and developers regarding various regulations of construction projects, as reduction in human contact would result in less chances of corruption. He said this recommendation is the part of NAB's study on the subject. He said that NAB will compile its study regarding construction industry and forward to Government of Sindh for formulating and improving regulations and implementation by Government of Sindh. He appreciated ABAD's initiative of adopting abandoned projects for the larger good of poor people who struggle to arrange shelter for their families. He highlighted the role of service delivery departments and said that NAB will take up the matter of water mismanagement in Karachi city due to which the poor are deprived of basic necessity. He said NAB will also take up the matter of illegal hydrants and tanker mafia. He said ABAD should work actively with public sector and service delivery departments to provide home to 12 million poor people of Karachi seeking shelter.

KCCI demands an across the board amnesty for industry and SMEs

CARGO TRANSPORT IS A BACKBONE OF THE ECONOMY: JAWAID ARAIN