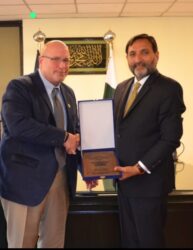 KARACHI: A high-powered delegation of Drug Enforcement Administration (DEA), Department of Justice, USA, led by the Country Attaché for Pakistan Mr Jaffrey A Konvalinka called on the Director General Customs Intelligence Mr. Faiz Ahmad on December 2nd, 2022. The DG explained to the delegation the core functions of Customs Intelligence and highlighted that the organization does not operate randomly but carries out its operations on the basis of credible information. It has fairly good expertise on gathering of information and success rate of its hits was more than 90%.

However, support of DEA of US Government will certainly improve Pakistan’s capacity further. Mr Jaffrey, the Country Attaché, informed that the Drug Enforcement Administration, of US Government was established in 1973 and today it has more than four thousand employees located in hundreds of offices across the country and around the world to fulfil its mission. The primary function of DEA was interdiction of controlled substances throughout the world by collection, analysis and dissemination of information on their movement.

He assured assistance of Drug Enforcement Administration, Department of Justice, USA in capacity building of Directorate General of Customs Intelligence on speedy information gathering and quality post seizure investigations. Opening of dedicated communication channel for improved coordination between the two agencies was also agreed during the meeting. The Country Attaché Mr Jaffrey also assured support for improved liaison and coordination between the Directorate General of Customs Intelligence and Foreign Law Enforcement Community (FLEC) to meet new and emerging challenges with respect to narcotics interdiction in Pakistan and the region.