Street crime has increased in Karachi, but the overall situation is better, Javed Alam Odho Will eradicate crime in Korangi and Mehran Town in collaboration with KATI: Additional IG Sindh 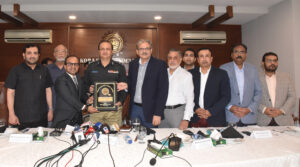 Karachi: Additional Inspector General of Police (IG) Sindh Javed Alam Odho said that Steps should be taken to eradicate crime in Mehran Town and Korangi in collaboration with KATI. Planning and contingency plan will be done in Korangi Causeway to deal with the expected floods due to Balochistan rains. He was expressing these views while addressing a luncheon meeting at the Korangi Association of Trade and Industry (KATI).

Additional IG Sindh Javed Alam Odho said that we are aware of the rise in street crime in Karachi but overall the crime situation was much better than before. He said that according to the data released by CPLC, the overall street crime in Karachi has decreased by 30 percent while the theft of motorcycles has been reduced to 40 percent. The police department is short of manpower. In the rapidly expanding city of Karachi, the police force is very small.

Javed Alam Odho further said that police patrolling, police check posts, and snap checking are being increased in industrial and commercial areas of Karachi on a priority basis. Police officers have been directed to increase the police presence in the city and eliminate unnecessary activities. He said that the investigation complex was being shifted to Korangi at the request of KATI, adding that some offices had already been shifted to Shah Faisal in this regard.

Earlier, KATI President Salman Aslam said that crime has reduced recently but street crime is on the rise. President KATI said that police patrolling should be increased in Karachi especially in Korangi to discourage criminal elements.

He said that the officers posted in Korangi are performing their duties honestly, which has improved the traffic situation in the industrial area.

Zubair Chhaya, CEO of KITE Limited, said there has been a sharp rise in mobile and motorcycle snatching incidents in the city. But the overall law and order situation is much better, the city does not have kidnappings for ransom or truck thefts like in the past. He said that the current rise in crime was also due to the economic situation of the country and unemployment.

Zubair Chhaya said that criminal elements were on the rise in Mehran Town which should be eradicated immediately. There are reports that the Landgrabbing Mafia has once again become active in Mehran Town. He said that under the guise of Labourers Welfare in Korangi, many organizations were being formed which were involved in extortion and blackmailing by threatening the industrialists, such elements must be eliminated.