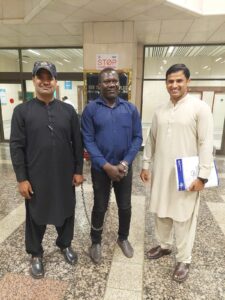 KARACHI: MCC JIAP Karachi has arrested Tochukwu David, a Nigerian national narcotics smugglers, in Lahore. Based on the information obtained from another arrested accused, the notorious smuggler was tracked and monitored using cutting edge technology and geo-fencing, which led to his arrest.

On 17th April, 2022, a passenger later on identified as Javed Rahi S/o Nasir Rahi was intercepted while he was passing through the Green Channel. The scrutiny of his traveling documents revealed that the above-named passenger was holding Pakistani Passport who arrived from Addis Ababa via Dubai by Emirates Airline.

The passenger was asked to declare whether he was carrying any contraband goods like narcotics etc. in his luggage or on his person, to which, he replied in negative.

Being dissatisfied with the passenger’s declaration, he was diverted towards scanning machine which indicated the presence of concealment cavity in his golden color suit case. Subsequently his suit case was examined in presence of two witnesses.

On thorough examination, the suit case contained personal apparel of the passenger, on further examination a concealed cavity was recovered at bottom side of the suit case which upon opening yielded presence of adhesive tape wrapped polythene bag of black color containing white powdery stuff.

A small sample of the said white powder was tested with the help of a “Narcotics Test Kit” which gave positive inference for the powder to be Cocaine.

Moreover, body search of the passenger was also taken but nothing was recovered. Consequent upon this confirmation, all the white powder (Cocaine) recovered from concealed cavity of suit case was weighed and found to be 3,600 grams (Net).

The recovered contraband cocaine was seized along with wrapping material, suit case as container and passenger’s traveling documents. Three representative samples of seized cocaine each weighing 10 grams were drawn and sealed, one for onward submission to laboratory testing. The passenger namely Javed Rahi is arrested accordingly.