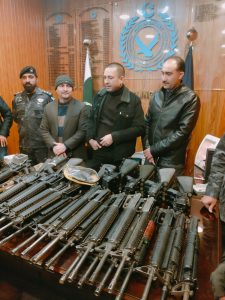 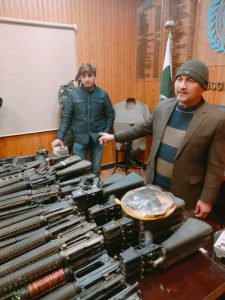 PESHAWAR: Customs Enforcement Peshawar (I&P) has seized large quantity of American rifles (old/used) coming from Afghanistan. The value of the rifles is estimated at Rs30 million. The rifles were being transported in a Mercedes truck worth Rs10 million, which is also seized.

Information was received through Collector Mr. Kamran to Additional Collector Muhammad Zakir regarding smuggling of arms in a Mercedes truck coming from Afghanistan. Deputy Collector Mr. Obaid formed a team led by Farrukh Satti and comprising Inspectors Jawad and Damash to thwart the attempt.

Subsequently, the suspected was stopped at Check Post Mattani. Although, the vehicle looked empty, but on cursory checking, secret cavities were detected. The vehicle was escorted to Custom House for detailed examination, which led to the recovery of 26 M16 rifles, one M4 rifle and one sniper rifle, all duly packed in plastic.

The goods along with the vehicle have been seized, and driver of the vehicle Said Muhammad s/o Jan Muhammad (Afghan national) is arrested. Sensitive agencies have contacted Customs, and they are onboard in these investigations. These rifles would be taken by the army in their custody.