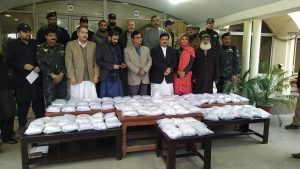 KARACHI: Custom authorities seized huge quantity of narcotics from a container at Torkham border on Thursday.

Officials said that the heroin, weighing 130 kilograms, was concealed in an empty container coming from Afghanistan.

They said that it was the biggest seizure of any type of illegal drugs at Torkham border, valuing Rs1.3 billion in the international market. The driver of the vehicle was arrested and his vehicle was impounded.

Officials said that narcotics worth of Rs3.23 billion was seized at Torkham border during the last 16 days.

“They found the narcotics from the hidden compartments of a truck, number KBL-3763,” Khan said, adding that the vehicle had been impounded and the driver, identified as Sharif Khan, was taken into custody.

He added that the empty container entered Pakistan from Afghanistan via Torkham.

The chief collector customs further revealed that there were intelligence reports of an international drug mafia network attempting to smuggle the heroin into Pakistan in an imported container.

Soon after, a team of customs personnel was formed under the Additional Collector Muhammad Tayyab to conduct the raid, he added.