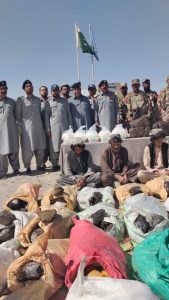 QUETTA: Customs Quetta has seized he quantity of smuggled goods in two separate operations near Dalbandin.

The seized smuggled goods include tea, foreign origin cigarettes and used tyres. The value of the seized goods is Rs10 million approximately. These goods were to be smuggled to in-country.

It may be mentioned here Federal Board of Revenue (FBR) has issued strict directives to control flow of smuggled goods including foreign origin cigarettes.

An officia said fencing on Quetta-Chaman border was underway, which would block unknown exits and influx of smuggled goods would stop.

Action will be taken against the smugglers who had brought non-customs duty paid goods inside the country and no concession would be given to anyone, as the authorities are trying to get the people to bring the goods into the country by paying customs duty instead of smuggling them. This will not only benefit them, but also bring revenue to the government.

Influx of terrorists and rogue elements from Afghanistan has stopped after Taliban took control of Afghanistan. Now, the security agencies as well as law enforcement agencies are trying hard to cut funding of the sleeper cells already in Pakistan.

An official said that with curbs and controls in place, such elements in the country can only get funding from smugglers, which is already established fact.