Victimization not the purpose, KCCI’s concerns over under-filer term to be addressed: FM 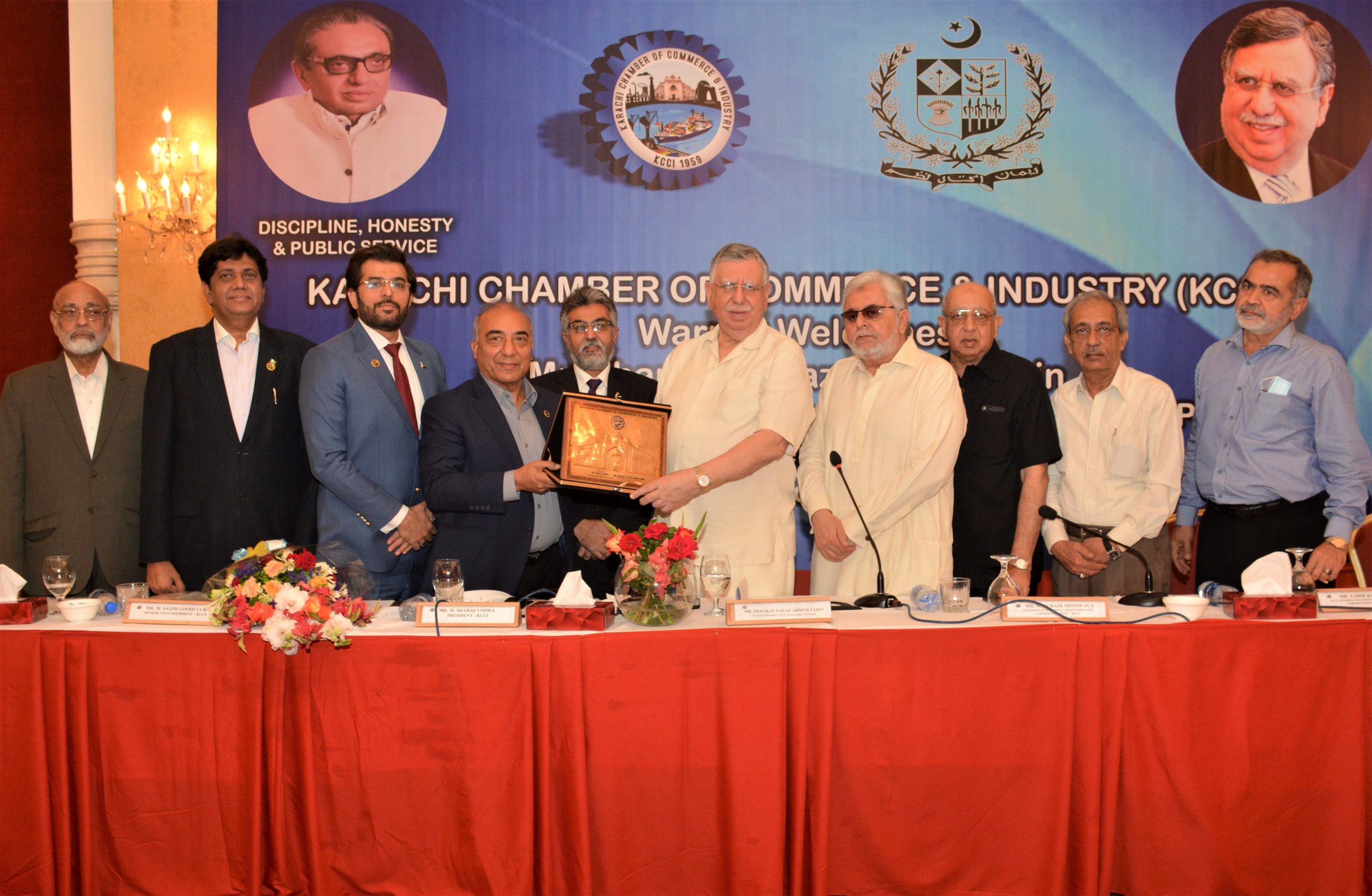 Deadlines for pending policies to be given during KCCI’s visit to ISB: Finance Minister:

Although FM allowed trade in rupees with Afghanistan but SBP appears in denial mode: Zubair Motiwala:

KARACHI: Federal Minister for Finance & Revenue Shaukat Tarin has assured that the Drawback of Local Taxes & Levies (DLTL) has been extended and it will not be discontinued while the business community is going to get all its claim on time as funds for the purpose have already been allocated in the budget and the pending DLTL claims of Rs32 billion of the last fiscal year will also be settled in the next six months.

Exchanging views with the leadership of Businessmen Group (BMG) and Karachi Chamber of Commerce & Industry (KCCI) at a meeting held here in a local hotel on Sunday, Finance Minister advised KCCI to visit Islamabad in order to discuss their reservations about the new Ordinance, besides resolving all issues on the spot by arranging meetings with Prime Minister Imran Khan, Advisor Commerce & Investment Razak Dawood, Federal Minister for Energy Hammad Azhar and Federal Minister for Industries & Production Makhdoom Khusro Bakhtiar. “We will instantly give deadlines for all the pending policies as PM is determined to revive business, industrial and agricultural activities”, he added.

Shaukat Tarin categorically stated that victimization was definitely not the purpose of the Ordinance which was purely for non-filers and those under-filers who file zero tax. It was a matter of concerns that out of a total of 2.9 million filers, one million are those who file tax returns and show zero taxable income. “We are intending to take help of artificial intelligence would examine electricity, gas, telephone bills along with banking transaction activities and other details of such filers and classify them as under-filers who will be asked to submit their taxes through a third party.

He said that the government was serious towards resolving issues in order to ensure sustainable economic growth at the rate of 5 percent which was the basic reason for enhancing the PSDP and reducing prices of raw materials so that the industry could stand on its feet. “Good news is that we are growing as all the indicators are showing improvements and we are growing faster than what was being expected.”, he said, “However, the import bill is going to touch US$19 billion this year as compared to US$13 billion of last year mainly due to rising petroleum prices and other commodities which we have to absorb.”

He said that the government’s target was to improve the pace of exports from the existing 8 percent to 18 percent in the next few years while the narrow industrial base was also being expanded through incentivization. Incentives have been given to construction sector, pharmaceutical sector, spare parts manufacturers. “Anyone with economy of scale production is being incentivized to enable them to go for exports as well. We have to improve the exports and FDI by facilitating the local investors through Board of Investment. If our local investors will not be happy, how are we going to attract foreign investors.”

He was of the opinion that inflation was not the issue of Pakistan alone as many countries around the world including regional countries were also facing this issue which was due to disruption in production all around the world due to covid along with logistics disruptions and exorbitant container chargers. “Prices of Palm oil, wheat and rice have been rising globally since 2018. We cannot isolate ourselves from international commodities prices as we are linked with them.”

Chairman BMG & Former President KCCI, while expressing deep concerns over the newly promulgated ordinance in which enforcement measures have been introduced in the name of broadening the tax base, stated that this ordinance has frightened everyone mainly because of the term under-filer which was pinching in everyone’s mind and needs to be removed.

He said that it was highly unfair that instead of appreciating and pampering the filers and acting strictly against the non-filers, this ordinance targets existing filers too by tagging them as under-filers which would open up more avenues of harassment and corruption. Hence, the term under-filer has to be expunged from the ordinance.

Underscoring the need to take everyone into the tax net, he said that any income being derived from this country which crosses the benchmark set by the government should attract tax whether it was agriculture, industry or trading. “We are patriotic citizens and we would like to see Pakistan growing and tax collection at optimum level so that development takes places all over the country.”

“Keeping in view all the expenditures, we really need at least a minimum tax collection of Rs12,000 billion but for that purpose, you will have to look where the funds were being lost instead of looking for them everywhere”, he said, adding that the ordinance was being considered as victimization for being in the tax net as the FBR, which has all the details of the filers would go for the easiest way by acting against filers instead of hunting for non-filers. “Before devising such laws, all the stakeholders should have been consulted and taken on board.”

Zubair Motiwala also pointed out that DLTL has not been extended as no extension notice has been issued since July 1, 2021 and the exporters have no idea whether DLTL was there or not. “Although DLTL claims worth Rs32 billion have been cleared by FBR and sent to the State Bank as well but the amount has not been released as yet”, he added.

Highlighting the issues of Karachi, he said that the Prime Minister announced an ambitious Karachi Transformation Plan (KTP) of Rs11,000 billion but nobody knows when it was going to come on ground and what was the progress so far. Representatives of business community, who know where exactly the development and upliftment works were needed in industrial areas, were also not being consulted in the transformation plan for Karachi. “The design of K-IV Project, which is the lifeline for Karachi, has been changed 11 times that resulted in escalating the cost of this project from Rs22 billion to more than Rs100 billion which was also a very serious issue.”

He was of the view that although Pakistan’s ranking in World Bank’s doing business index has improved to 108th but it was still too high because the business community has not been provided an even-playing field. “Within Pakistan, we don’t have an even playing field as Karachi was expensive when compared with the cost of doing business in Punjab and other areas. Although the government extended RLNG at $6.5 per MMBTU and electricity at 9 cents per unit to five zero rated sectors but the RLNG relief has not been given to industries in Karachi who just started receiving electricity at 9 cents after a gap of two-and-a-half months.”

He appreciated Finance Minister for allowing trade in rupees with Afghanistan but the State Bank has not issued relevant notification in this regard and the trade with Afghanistan has gone down by 60 percent.

President KCCI Shariq Vohra, while welcoming the finance minister, appreciated the strategies adopted by the government that led to consolidating the economy with a GDP growth of 4.8 percent whereas consistency was visible in the exports and the large-scale manufacturing was also performing well, creating a much comfortable situation not only for the government but also for the private sector.

Highlighting KCCI’s macroscopical perspective, he said that there has always been a mismatch in Exports vs. Imports as the exports remain stagnant in between US$22 to US$25 billion and the imports keep rising. Depreciating rupee value was also neither supporting the exports nor the businesses and the economy which can only be saved when the government devises effective strategies for enhancing the meager industrial base of the country and also creates an environment in which the industrial units could have surplus production.