In a letter addressed to the Chairman FBR, she alleged that  custom officer Dost Muhammad and web site join hand to defame the learned judge of the Custom Court. She referred to a complaint against her by an advocate Syed Asif Ali Bukhari and said this advocate is untraceable.

The said complaint by a Karachi based lawyer was entertained at the departmental level and is being under probe.

The learned judge maintained that publication of the fictitious letter using the name of a lawyer was aimed at defaming the court and discouraging it from deciding the cases on merit.

The web site reporter and other were accused of taking money / bribe to publish unfounded, baseless news. She demanded a probe against the people complained against.

The copy of complaint by the learned Custom Court judge and complainant by the lawyer Asif Ali Bukhari are annexed / linked with this news. 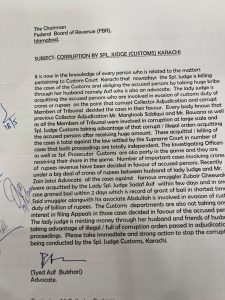