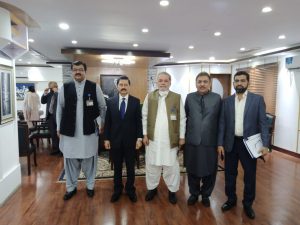 The worthy Chairman FBR gave a very patient hearing to the problems being faced by the Customs Agents.

The delegation of Karachi Customs Agents Association is very much appreciated of the sympathetic attitude of the Chairman FBR. He very kindly issued necessary instructions with regards to the agenda points as highlighted by KCAA.

It was assured that sufficient number of staff will be deputed by the FBR at all Collectorates in order to avoid delay in the clearance of import and export consignments.

Upon request of KCAA, Chairman approved that under the supervision of Chief Collectors joint committees should be formed comprising of Customs Officials including two representatives of Karachi Customs Agents Association respectively in each committee, in order to address issues being faced by the trade.

It was also decided that once a month meeting of the said joint committees will be arranged by the collectorate regarding blocking of Customs Agents Licenses.

Chairman directed to the concerned quarter that matter should be reviewed in the meeting of joint committee on merit, in order to avoid unnecessary blocking of customs agents licence.