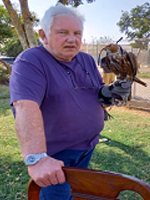 In the middle of October 2020 Pakistan Customs Karachi, took a massive stride forward in the protection of wildlife in their country and confiscated a very large consignment of illegally trapped falcons that were in the process of being smuggled out of the country.

The action itself was one that was very far from straight forward and not without considerable risk to those involved. But the training and dedication of the team from Karachi Customs saw the confiscation carried through regardless and accordingly some 75 falcons and a Houbara had suddenly to be housed, handled and generally catered for.

The illegal trade in the trapping of falcons and then smuggling them out the country is unfortunately one that has been going on for a very long time. It is fueled nowadays entirely from outside of the country by influential markets where money is no object.

However the authorities in Pakistan are fully aware of the problem, and as the actions of Pakistan Customs Karachi show, are prepared to deal with the situation head on.

Mr. Kamran Khan Yousafrzai, President of the Pakistan Falconers Association stepped in and worked with the dedicated officers from customs and a temporary sanctuary was established and the falcons from that point forth were in good and reliable hands.

Most falconers would struggle severely if given four of five falcons to suddenly cater for never mind in excess of seventy. But Mr. Yousafrzai applied his calm, professional approach and within days a form of order was brought to the chaos initially presented. It was at this point that I was contacted, in my role as Founder and Chairman of Project Lugger, and asked if I would be in a position to help at all.

The obvious answer was an immediate yes. As well as organising a couple of volunteers to fly out with me I managed to put Project Luggers vet in touch directly with the vet in Karachi assigned to look to the medical needs of the falcons. The Project also donated 100 microchips and a couple of applicators as well as sorting some basic medical supplies.

Myself and two volunteers duly arrived at Karachi airport and officers from Customs were on hand to help smooth our passage and after a while we were, certainly in my case, once again happily on Pakistan soil. Despite the fact it was around 4am we drove straight to the Customs Sanctuary to have a look at the work that was before us.

It was obvious this was going to be a considerable task that we would be cooperating on, but the welfare of the falcons was to override all other considerations. Accordingly with the benefit of just a few short hours sleep we were straight into what needed to be done.

As is so often the case, fresh eyes can often see a fresh approach, and so we three volunteers worked with the three Pakistan falconers that had been engaged and together with Mr. Yousafrzai we formulated a new daily rota and a stream lining of the daily handling process. We were all too well aware that we would be leaving again relatively shortly and the systems established would have to be manageable by half the people once we had departed.

I like to think that our presence did in fact help with the overall welfare of the confiscated falcons and that morally it was something of a boost to those on the front line in Karachi. Certainly our presence helped focus some of the international media on the issue and the outstanding work carried out by Pakistan Customs Karachi as well as that of Mr. Yousafrzai and his team.

For me personally, as an international Falconer of more than fifty years standing and also an avid and active conservationist in the field of raptors, it was an honour to be involved in such an action as this. However, it was clear that further help was going to be required and so I assured both Customs Karachi and Mr. Yousafrzai that I would return and help see the job through.

I arranged for myself to come for six weeks and to be accompanied by two groups of three volunteers for a three week period each. But the surge in the Covid Pandemic in Europe put paid to that and so I returned with one other volunteer to help as and where we can.

Whilst back home in the UK I did ensure that the European media were made fully aware of the magnificent and groundbreaking steps taken by Pakistan Customs Karachi and the collaboration with The Pakistan Falconers Association that facilitated the aftermath of the consignment seizure.

The world media appears to have taken this action to both screen and the printed page and I have seen interviews I gave to the media whilst here in Pakistan in approximately nine different countries and also in newspapers as far apart as Belgium and Japan.

Personally I would like to thank both Pakistan Customs Karachi and Mr. Yousafrzai for allowing me to be part of this ground breaking action. As always I have met with nothing but kindness and a sense of true welcome by all I have met. Special thanks indeed must go to Mr. Haroon and Mr. Shafi Ullah. It is an honour sirs, for me to assist you in some small way in your work.

Bob Dalton has been a falconer for more than fifty years and has hunted with falcons in more than 35 countries. He is also a passionate raptor conservationist and is the founder and chairman of Project Lugger, a charity set up to try and conserve the wild Lugger Facon (Falco jugger).

Graham Dudmish is a falconer of 35 years standing and for many years also made the finest quality Falconry Equipment.

Hielko Van Rijthoven. A very experienced Dutch Falconer who is a major part of the “Wings of Change” in Holland. An organization that works with the underprivileged people in the Dutch Community.