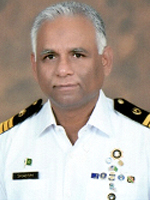 The modern world is doing its best to utilize its time in the best possible way, while doing business or trade.

Considering the quantum of international trade through the sea freight containers, which has crossed the volume of more than 500 Million TEUs moving in the international global trade chain per year.

This makes it practically impossible for any Customs Administration to target and examine each and every shipment which is either leaving, entering or transiting through their land, border or sea routes considering the local and international threat perceptions.

According to the studies carried out by the UNODC, more than 500 M.Tons of Heroin is being produced in Afghanistan and 40% of this is routed through Pakistan to reach the International markets in West Africa, Europe USA and Canada.

Pakistan is providing transit facility to its neighbor Afghanistan for movement of their commercial cargo and the Port of Karachi and Port Muhammad Bin Qasim are being used for shipment of transit goods to international market.

These sea-freight containers therefore, pose a great threat to the international trade supply chain. It was in 2004 when the United Nations Office on Drugs and Crime and World Customs Organization, visualized the problems and threat of illicit use of sea freight containers and introduced the Container Control Programme (CCP).

This program is focused for capacity building of Customs and other relevant law enforcement agencies to focus on sea-freight containers which are illicitly being used for transportation of drugs, precursor chemicals, dual use and strategic goods in the garb of legitimate cargo, or by using legitimate cargo as cover load.

The UNODC-WCO Container Control Programme was initiated at the port of Guayaquil in Ecuador (South America) and afterwards Ghana, Cape Verde and Pakistan were amongst the first four countries across the globe to join the CCP Pilot Phase in 2007. During the pilot phase the Programme started at the Port of Karachi and Port Muhammad Bin Qasim.

FBR decided that MCC Preventive having the requisite mandate of enforcement and historical experience of enforcement shall carry out the task and Collector MCC Preventive was notified as the Project Director for the Programme. Since its inception in Pakistan the CCP produced tremendous results which speak very loud of themselves and got appreciation not only at the national but at international level.

After successful completion of Pilot phase at Karachi CCP was extended at the following Dryports and Land Border Stations of Pakistan;

International best customs practices suggest 2% examination of cargo and automation of its processes for the facilitation of trade. Today’s market is challenging in terms of time and everyone across the globe is desirous of having their cargo at their doorsteps in the least possible time and through very efficient systems.

This creates a lot of pressure on all customs administrations. Pakistan Customs, as a dynamic organization has taken up the challenge and evolved a dynamic electronic clearance system of its own. The inbuilt and robust RMS of the system facilitates the trade by minimizing the dwell time of cargo at the seaports, dryports and air freight units.

Port Control Units established under the UNODC-WCO Container Control Programme are focused on the challenges being faced by the country. As part of CCP a joint initiative has been taken up by the World Customs Organization in collaboration with Interpol and Programme Global Shield has been initiated. Programme Global Shield is focused on thirteen such chemicals which have been globally identified as precursors for IEDs.

These IEDs pose a great threat to the security within Country but being dual use commodities all these thirteen chemicals are widely available in the market and there was no mechanism to monitor the end use of these chemicals.

In order to take up the challenge Sub Section 1(A) under Section 26 of the Customs Act has been introduced where the Board or any officer authorized in this behalf may require any person to provide such information as is held by that person which is required for the purposes of End Use Verification of goods specified under Program Global Shield. This is a giant leap towards securing the international trade chain and strengthening the internal security of the country.

In addition to above, the project of Security Improvement of Karachi Port and Port Muhammad Bin Qasim where the Government of Japan through its implementing agency JICA which has funded for the installation of three static gantry type container scanners.

These scanners are of great assistance in conducting Non- Intrusive Inspections of Sea Freight Containers, either in exports, imports, transit or transshipment. Moreover, Asian Development Bank has also funded a multi-billion dollar project in creating a coordinated border management system under the title of ITTMS (Integrated Transit Trade Management Systems).

This ITTMS Project is being built at three border stations of Pakistan i.e. Torkham, Chaman (both linking Pakistan with Afghanistan) and Wahgah (linking Pakistan with India). These border stations will provide an international standard coordinated border management for all stakeholders to not just facilitate the trade but also protect its borders from any unwanted and untoward incident by having clear and transparent speedy clearance systems.

The key to success is by maintaining the balance of a thin line in between facilitation and enforcement which Pakistan Customs will achieve through these projects.

Pakistan is also signatory to UN Security Council Resolution 1540 besides many others resolutions of similar nature putting various embargoes on Libya, North Korea, Cote d’Ivoire, Al Qaeda and many others.

Pakistan Customs through these Port Control Units is also enforcing the implementation of all these UN Security Council Resolutions, thus making this globe secure from international terrorist organizations, entities and individuals.

In case this attempt to smuggle such a huge cache of Acetic Anhydride would have reached the illicit market it could have been able to assist in the production of more than 52 tons of Heroin and/or in the manufacture of numerous IEDs which could have done a fatal loss to so many innocent lives.

Pakistan is also the first country around the globe to extend this Container Control Programme to the air cargo side by creating ACCU (Air Cargo Control Unit) with the assistance of UNODC and WCO.

The above glimpse of Pakistan efforts gives a very vivid picture about the commitment and zeal of Pakistan Customs towards creating a secure business environment for economic development locally and globally. We are not only the guardians of economic borders of Pakistan but we are also contributing towards the peace and stability of the international community and trade in particular.

The Customs Port Unit Headquarters during the month of June 2020 gathered intelligence to the effect that an attempt to smuggle a huge quantity of Acetic Anhydride will be made for smuggling it further to Afghanistan for its illegitimate and illicit use in the production of Heroin.

Though the prevailing COVID-19 situation delayed this movement with Acetic Anhydride from China in the garb of “Liquid Laundry”.

Container number HDMU2502150 declared to contain “789 Cartons Liquid Laundry arrived on 18th June, 2020. The shipment was seized during the high period when the pandemic was on the rise and the seizing officer himself was suffering from COVID-19 but in order to execute and tactfully conduct the operation he came out of the quarantine and proceeded with the seizure of 3.2 M. Tons of Acetic Anhydride.

On 14th September, 2020, acting upon the intelligence shared by the Port Control Unit of Pakistan Customs, the UNODC CCP Team in coordination with the US DEA agents conducted a joint-operation inside Afghanistan and seized 6 M.Tons of Iodine.

The significance and global implications of this historic seizure can be made from the observations of the International Narcotics Board, which has estimated that the seized Iodine could have potentially produced 4.5 Metric Tons of Methamphetamine, which according to UNODC survey reports has an international market value of 91.670 Billion Pak Rupees, which has suspicious linkages with terror financing.

The current pandemic situation caused by COVID-19 has profoundly changed the reality of everyone, everywhere. People and organizations around the globe have experienced the shock of being locked down and the distress of uncertainty of what lies ahead. Customs Administrations across the world have not been spared from this situation.

As a result, Human Resource professionals in Customs are navigating unknown waters and they have to reconcile staff’s safety and security with keeping vital trade flowing for economic prosperity. The crisis has illustrated that the people within the Customs administration – the Customs officers – are its greatest asset. They are the driving force behind the operations and processes.

Therefore, more than ever before Customs HR professionals, are being called upon to completely change their operating model while being agile in order to support an appropriate and innovative response to this crisis.

During the challenging times of the COVID-19 pandemic, Pakistan Customs continued to focus on delivering vital assistance to the trade by virtually facilitating the business processes and avoiding man to man contact.

The revenue collections despite the Pandemic, is on the rise since the trade and business community was provided a very conducive environment for conducting their day to day affairs by adopting a proactive and innovative approach based on virtual capacity building and technical assistance.

The support provided by the FBR to its field formations, and especially to executive and professional Customs HR personnel, enabled them to effectively respond to the current crisis and potential future crises.