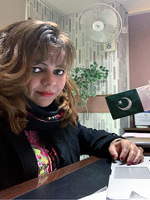 FMCG stands for fast-moving consumer goods such as soft drinks, dairy products, toiletries (e.g. toothpaste, deodorants, soaps), batteries and even some forms of over the counter medication. FMCGs are sold at low prices and have a high rate of consumption.

They are always in demand and are also called consumer packaged goods (CPG). Well-known FMCG companies in Pakistan include Unilever, Proctor and Gamble, GlaxoSmithKline, Nestlé and The Coca-Cola Company. The hallmark of these companies is continuous improvement and innovation.

Over the last few decades, drug cartels have shifted their focus to trade in counterfeit and pirated fast moving consumer goods. This shift offers them high profits with low risks and minor penalties. However counterfeiting is a trans-border crime that not only violates intellectual property rights, but further endangers public health and consumer safety.

A study conducted by European Union Intellectual Property Organisation (EUPIO) in 2015, looks into the direct and indirect industry revenue losses and job losses due to the presence of counterfeit products, such as perfumes, beauty and make-up, and other personal care products.

It also looks at the impact on public finance. €4.7 billion of revenue is lost annually by the sector, whereas €4.8 billion of sales are lost in related sectors accompanied by thousands of job losses.

Realizing the need to target counterfeit FMCGs a Joint Customs Operation (JCO) “HYGIEA” was organized by the European Anti-Fraud Office (OLAF) in association with the administration of Asia Europe meeting (ASEM). ASEM is an intergovernmental platform of 51 member states of Europe & Asia, created for the purpose of cooperation on areas of mutual interest including Customs with the objective of strengthening relationships between Asian and European countries.

In addition to the member countries, two observer organizations, OLAF and EUROPOL also participated in the operation. FBR nominated the Directorate General of IPR (Enforcement), Islamabad to serve as a national contact point for this operation.

A debriefing meeting of the operation was scheduled by European Anti-Fraud Office with a view to evaluate the performance of 38 participating countries out of 51 members of ASEM during the specified operation period of five months.

A final report on JCO HYGIEA formulated by OLAF reveals that a total of 194,498 pieces of counterfeit perfumes, toothpaste, cosmetics as well as 120,833,69kg of counterfeit detergent, shampoo, and diapers were detained and seized as direct results of the operation targeting counterfeit FMCG products.

During the operational phase of HYGIEA, OLAF facilitated the cooperation between the participant countries with the support of a team of ten liaison officers from Bangladesh, China, Japan, Malaysia, Vietnam, Lithuania, Malta, Portugal, Spain and EUROPOL, all working together in Brussels.

A Virtual Operational Coordination Unit (VOCU) – a secure communication channel for the joint customs operations was used to channel the flow of incoming information. This exchange of information in real time allowed all the experts involved to identify the suspect flows of counterfeit goods out of ordinary commercial transactions.

JCO HYGIEA was a success story as summed up by: Mr. Ville Itala, Director General of the European Anti-Fraud Office (OLAF):

“Operation Hygiea shows what can be achieved when customs authorities, international partners and industry work together to fight fakes. Counterfeit goods defraud consumers, harm legitimate businesses and cause huge losses to public revenues. Counterfeit goods also undermine public health policies. When fakes flood our markets, the only ones to benefit are fraudsters and criminals. I warmly congratulate all those that participated in Operation HYGIEA for the excellent results”

Pakistan Customs through the Directorate General of IPR Enforcement continues to intercept, detain and seize consignments of counterfeit FMCG products. One of our significant achievements was to seize massive quantities of counterfeit Sensodyne toothpastes both at import stage and in transit shipments.

We continue to build on this trust and cooperation while realising the imminent need to dismantle fraudulent organisations involved in trafficking of counterfeit FMCG products. Eventually we should all be geared up with a renewed energy to combat counterfeit FMCGs through focused, innovative techniques.