Motiwala for insertion of arbitration clause in CPFTA to deal with trade conflicts.

KARACHI: The Karachi Chamber of Commerce & Industry (KCCI) has achieved a significant milestone by signing a Memorandum of Understanding (MoU) with Shanghai Federation of Industry & Commerce (SFIC) for establishing and maintaining long term ties, setting up a joint working group and building a platform for economic and trade exchanges and cooperation between Karachi and Shanghai.

Chairman BMG & Former President KCCI Zubair Motiwala, while appreciating the collaboration between KCCI and SFIC after signing of the MoU, pointed out that although Pakistan and China have been enjoying excellent relations but the business communities of the two countries will have to focus on further strengthening trade and investment ties by undertaking joint ventures in numerous sectors of Pakistan’s economy, particularly the infrastructure development and the energy sector as Pakistan has been facing dire gas shortages.

He pointed out that in 2019, Pakistan exported goods worth US$2 billion to China while the imports from China stood at US$16.2 billion, depicting a trade deficit of $14.1 billion. “Trade cooperation between the business communities of the two countries has to be strengthened and improved to such an extent that it converts the US$16 billion imports of Pakistan from China to US$16 billion exports to China which is possible only if we make collective efforts”, he added.

Zubair Motiwala mentioned that total trade with China improved by 300 percent to reach US$18.2 billion in 2019 mainly due to China Pakistan Free Trade Agreement. However, while imports from China grew rapidly, Pakistan’s exports could not secure similar gains in China which was a matter of concern. “If we look at the trade figures of last seven years from 2013 to 2019, the exports to China have declined by 26 percent in 2019 compared to 2013, while the imports have risen 47 percent in 2019 compared to 2013. China’s share in Pakistan’s exports and imports has risen steadily too, though China’s share in Pakistan’s imports has grown much more rapidly than its share in exports”, he added.

He also stressed the need to insert a clause for arbitration in the existing FTA between Pakistan and China after mutual consensus as the business communities of both sides have often been facing a lot of problems and even suffer losses in case of any trade conflict.

He further stated that obtaining business visas to gain entry into China and gauge the market is another impediment to exports which requires attention as businessmen often find it difficult to gain access to the Chinese market due to this particular hurdle.

Chairman BMG underscored that some kind of resolution or commitment must come out of today’s webinar in which both business communities should make a pledge to make collective and all-out efforts on long term basis to pave way for improved trade ties. “Such webinars between the business communities from Shanghai and Karachi will go a long way in creating a conducive environment and surely prove favorable for the economies of the two countries keeping in view the massive contribution being made by Karachi and Shanghai in the economic development of their respective countries”, he added.

President KCCI Shariq Vohra, in his remarks, stated that KCCI and SFIC, being the premier chambers of industries in their respective countries, have united today to form a synergy to work collectively on bilateral goals for promoting business, trade and investment on long term basis. “KCCI will jointly carry out consultation and evaluation on regular basis to ensure effective implementation of the MoU which would help in achieving the objective of creating a win-win situation for the business communities of the two countries”, he added.

He was of the view that Karachi and Shanghai were two major hubs in the region which play a significant role in the economic growth and development. As compared to the last few years, the overall situation in Karachi had substantially improved, which can be beneficial for Chinese investors as well who can explore opportunities of enhancing cooperation in different sectors of the economy.

He stressed that KCCI and SFIC should exchange useful information with respect to each other’s business meetings, fairs and exhibitions to be held either in Karachi or in Shanghai, besides encouraging maximum number of businesses to participate in all such events in which agricultural products, textiles and clothing, technological innovation, infrastructure development, renewable energy and many other promising sectors should be promoted. 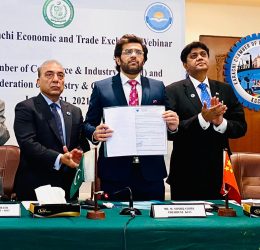