KARACHI: Federal Boar of Revenue (FBR) has suspended 23 Customs officials including Inspectors, Preventive Officers, Appraising Officers and a Superintendent; along with 17 Sepoys in relation to the clearance of 115 containers coming from Afghanistan without payment of duty and taxes.

The detailed scrutiny done by the FBR’s Customs Intelligence under the supervision of its Director General (DG) Zahid Kokhar confirmed through official record of FC and CCTV footage that these containers were passed through the gate of Torkham border but without Goods Declaration (GDs) and other import related documents through import/export clearance system WeBOC.

Sources said Prime Minister Imran Khan had ordered FBR to take action against those involved in the clearance of containers carrying fruits, dry fruits and other goods from Torkhan without assessment and payment of taxes.

The scam was unearthed in February this year, after which senior Customs officers were transferred and some were made OSD.

An official said Prime Minister Imran Khan had taken many measures that would go a long way in facilitating trade and minimizing smuggling as well as securing government revenue. A comprehensive anti-smuggling drive was launched, which is continuously gaining momentum. The quantum of smuggling has reduced a considerable extent. Markets and warehouses used to be out of bound for Customs and anti-smuggling authorities and no one dared to poke the smuggling mafia.

Similarly, SRO 1125 was abolished. SRO 1125 was the most misused regulatory order and it caused a loss of hundreds of billions of rupees to the national exchequer.

However, the irregularities and misuse of Green Channel Facility has so far been ignored. High value and high tariff goods including steel goods, electronics, cloth, auto parts, betel nut, gutka and other banned goods were cleared in the garb of used clothing and scrap through green channel. This was a mega scam, which was running in the patronage of Customs officers and officials.

But, these officers and officials were given clean chit by NAB under plea bargain. They had caused a loss of billions of rupees to the national exchequer, and they were cleaned by NAB against payment of peanuts.

It seems that PM is helpless on certain fronts and due to this reason; he can’t perform as per the propagated vision. For instance, Imran Khan is helpless in Punjab and can’t replace Chief Minister Usman Buzdar. Pakistan Tehreek-e-Insaaf (PTI) does not have majority in Punjab assembly anymore, and removing Usman Buzdar means giving away Punjab government. Similar is the situation in many other cases. In order to keep the government, PM has to take U-Turns, which is good politics.

Although, PTI has not been able to fulfill all the promises, but still several agenda items have been put in place. At some places Imran Khan is helpless and at some places, he is misled by vested interests around him.

Here is the list of officials and sepoys suspended: 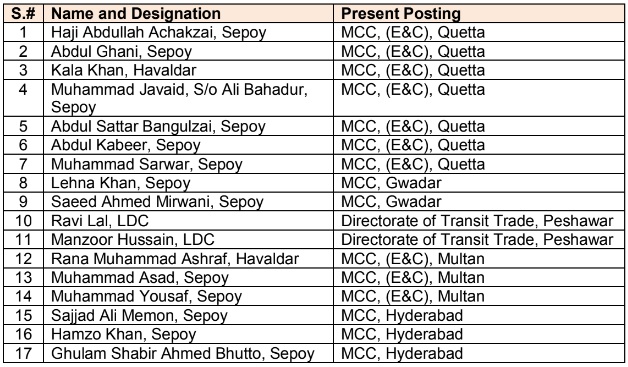 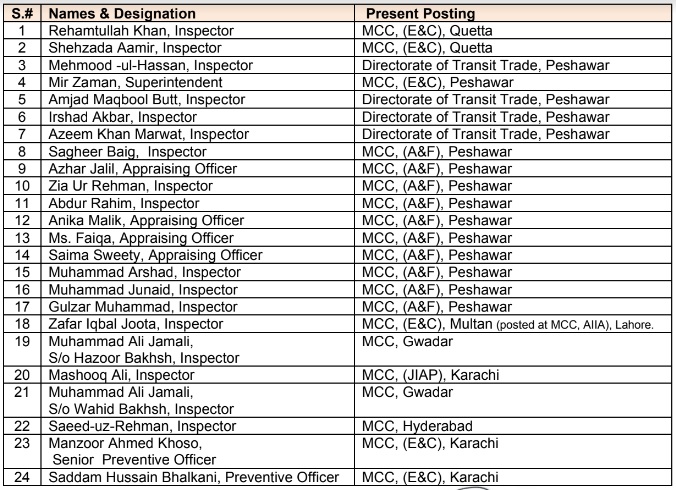