KARACHI: Recovery or seizure of any baggage/goods of the passenger or of any crew member, subsequent to false declaration or failure to declare shall be treated at par with ‘smuggled’ goods’.

Briefly, through the Tax Laws Second Amendment Ordinance, certain penalties have been specified for persons who smuggle goods comprising currency, gold, silver, platinum or precious stones in any form. These include confiscation of smuggled goods (exceeding the permissible limit, if any).

Further, such persons are also made liable to additional penalty or imprisonment or both in the following manner, depending upon the quantity of smuggled goods thereof: 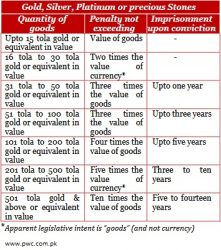 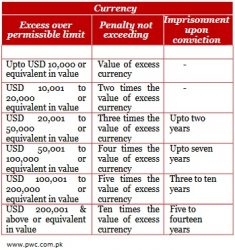 These penalties are also made applicable to ‘owner’ of baggage who fails to declare or makes false declaration with respect to such baggage or articles carried by him or refuses to answer the question by appropriate officer or fails to produce baggage or articles for examination, in case goods carried by him include currency, gold, silver, platinum or precious stones in any form.

Previously, such owner of baggage was liable to penalty not exceeding three times the value of goods along with confiscation of same, in respect of all kind of goods, the penal provisions are now relevant only in case of goods other than currency, gold, silver, platinum or precious stones in any form.

Furthermore, under Sr. No. 47A of the Table to section 156 of the Customs Act, 1969, owners of goods who fail to file goods declaration within the prescribed period were subject to a certain ‘penalty’ as specified therein; however, through the Second Amendment Ordinance, following importers have been excluded from applicability of such penalty: (i)individuals without NTN or STRN importing/receiving goods as ‘gifts’ through courier, air cargo or diplomatic cargo; and (ii)imports by Federal Government or Provincial Government or Local Government.