KARACHI: The Ministry of Commerce has facilitated used car imports by allowing importers to pay the duty/taxes shortfall, arising due to rupee depreciation or additional taxes, through local resources.

The ministry provided in the Import Policy Order 2016 that in case the Pak rupee depreciates or government increases the import duties or taxes after receipt of remittance and before filing of goods declaration, which results in shortfall of remitted amount against payable duties and taxes, the importer is allowed to meet the shortfall through local resources.

An importer said this would facilitate smooth clearance of imported cars, as in such cases of shortfall in remitted duty/taxes, the imported cars were stuck at port causing losses to the importers.

The government imposed many restrictions on the imported used cars in January 2019. It was imposed that the duty and taxes, on cars imported under gift and baggage scheme, must be paid in foreign exchange from the foreign country accounts i.e. the country from where the cars were dispatched.

The measure was taken to discourage misuse of gift and baggage scheme, earn foreign exchange and discourage imports as a whole.

Prior to this, around 34,000 vehicles were imported in Pakistan. After the introduction of restrictions, only 1800 cars could be imported out of which 1000 were stranded at the ports, waiting for clearance due to above mentioned reasons. 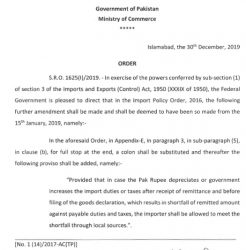