KARACHI: The Federal Board of Revenue (FBR) has notified re-designation of 180 vacant post of (BS-16) in the Customs Department.

This development has spread a wave of panic among Superintendent Customs, Senior Auditors, Inspector Customs and Intelligence Officers as this re-designation of posts would adversely impact the seniority of these officials.

An official said Superintendent Customs, Senior Auditors, Inspector Customs and Intelligence Officers were quite close to their promotions and conversion of their posts as Principal Appraiser and Appraising Officer would dim the prospects of their promotions as they would be lowest on the seniority list of Principal Appraisers and Apprising Officers.

The Federal Board of Revenue (FBR) has also notified transfer/relocation and readjustment of the executive and operations posts (BS-16) in the Customs Department. 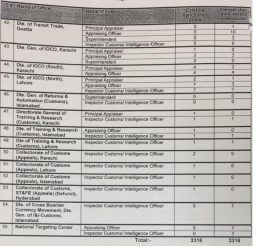