“This IT based system would be implemented in two years,” Abbasi said adding, “Times have changed and a lot of information about people is already available on various digital forums, which would be integrated in the FBR’s system”.[the_ad id=”31605″]“The system would itself identify the tax evaders and avoiders based on their pattern of spending, revenues and tax payments, and such persons would automatically be issued notices,” FBR Chief said while speaking at Federation of Pakistan Chambers of Commerce and Industry (FPCCI).

He said that as a test case 6,000 individuals were identified as they were spending way more in relation to their tax payments, and a demand of Rs3.0 billion was raised of which Rs1.75 billion were recovered.

He said the Federal Board of Revenue (FBR) would issue the promissory notes to exporters against their sales tax refund claims in April, 2019.

Talking about the revenue shortfall, Chairman FBR said the government had announced several business facilitation measures in the supplementary finance bill, which directly impacted revenue collection. “There is a revenue collection shortfall of Rs220 billion and we need your assistance in bringing macroeconomic stability, which in turn spur investment,” Chairman FBR asked the business community.

“There will be more business facilitation measures in the upcoming budget,” FBR Chief said and urged the business community to furnish their budget related proposals by the end of March.

He also informed that even after 70 years of independence the country did not have a tax policy. “Therefore, a tax policy is being drafted defining milestones, targets and facilitation measures etc. FBR will remove unnecessary taxes while withholding tax (WHT) would be reduced to minimal.”

Earlier, Member Inland Revenue Seema Shakeel said FBR wanted to facilitate taxpayers and encourage documentation of economy. She asked the trade bodies to encourage their members to get them registered.

“Tax evasion is a big problem. Most of the registered persons conceal their income and park their funds in benami accounts. The registered persons should come clean and pay their taxes honestly,” She said adding FBR never meant to harass taxpayers, but the board had to collect revenues.

On the occasion President FPCCI Daru Khan Achakzai said country economy was passing through a difficult time as total debt and fiscal deficit were widening, while reduced imports resulted in reduced revenue collection.

Talking about tax officials’ high handedness, Achakzai said raids were conducted on the premises of NTN registered persons, which was wrong. He suggested that option should remain available with the taxpayers to become active taxpayer, if they filed late returns on payment of late filing penalty.

Chairman FBR assured the business community that there would be no raid on the premises of NTN holders. 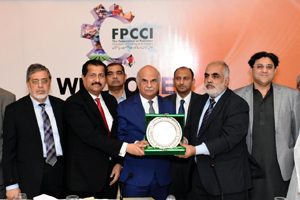