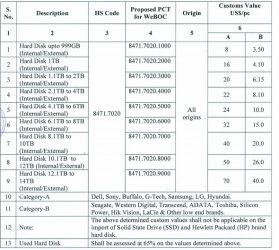 Representations were received from MCC Appraisement-West, Karachi that hard disks of various capacities are being cleared at lower values. Therefore, Directorate General was requested to determine its customs value for uniform assessment.

The brands of hard discs which are usually imported in Pakistan include Dell, Sony, Buffalo, G-Tech, Samsung, LG, Hyundai, Seagate, Western Digital, Transcend, ADATA, Toshiba, Silicon Power, Hik Vision, LaCie and other low end brands. [the_ad id=”31605″] Accordingly an exercise was initiated. A number of meetings were held with stakeholders, which were attended by different stakeholders including importers, officers from clearance Collectorates and representatives from trade bodies. All the stakeholders were requested to submit invoices of imports during last three months showing factual value; websites, names and e-mail addresses of known foreign manufacturers of the item in question through which the actual current value can be ascertained; copies of contracts made / LCs opened during the last three months showing the value of item in question; copies of sales tax invoices issued during the last four months showing the values of supplies (excluding duty and taxes) to substantiate their views.

The importers, during meetings, stated that the prices of hard disks depend on different capacities, brands and data storage. They further requested that the retailer margin of profit and warranty aspect may be considered while determining values of hard disc. Some of the stakeholders stated that used Hard Disks are being declared and assessed on very lower values.