Trams to return to Karachi

Top Stories
Last updated Jan 6, 2019
Share
A string ran the length of the tramcar and the bell was in the front where the tram driver stood which rang at intervals to warn pedestrians to get off the track. The driver stood in the middle of the front row of seats and turns a bronze handle to direct the tram through the turns. A conductor issued tickets as he made his way over to each aisle via a footboard on both sides of the tramcar. This was a common sight in early 1970’s in Karachi but over the years a classical yet cheap mode of transport faded away. Trams ran all over the Karachi City center from 1885 to 1975 and closed suddenly as demand for faster and modern means of transport emerged to be the priority of Karachi Metropolitan Corporation, a successor of Bombay Metropolitan Corporation.  It all started in 1881 when Edward Mathews of London submitted the tender for building this tramway network. In 1883 permission was granted by the colonial power , Government of United Kingdom to use Steam as the locomotive power for the trams. And construction work started in October 1884. The tramway was opened on April 20, 1885 employing steam-powered cars from St Andrew's Church (Abdullah Haroon Road and Sharah-e-Liaquat).  It was owned by Old East India Tramway Company. 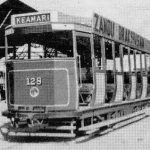 The trams ran on different routes. One route went as far as Keamari on Bunder Road past the Boulton Market and Mereweather Tower. Another route went via the Garden Road on to Preedy street, via Frere Street to the Karachi Cantonment Station. Another route went via Bunder Road to Mansfield Street on to Commissariat Road to Soldier Bazaar. Another route took the tram to Lawrence Road. In 1886, steam powered trams were replaced by horse driven tramways because the steam engines proved to be too noisy in the residential and commercial areas. By March 23, 1905 petrol-powered tram were introduced. By 1909 the entire fleet was replaced by petrol-powered trams. Each car can carry 46 passengers and could travel at a maximum speed of 18 mph. The first two petrol-engine tramcars were designed by John Abbott and his son John Dixon Abbott, incorporating the Dixon-Abbott patent gearbox, which were built in England. By 1914, there were 37 petrol-powered tramcars but in 1945 the first diesel-powered trams were introduced  and by 1955, 64 petrol-powered trams were there in Karachi. Trams were single deck 4-wheeled cars with back-to-back cross benches, with 8 ft wheel base, and were 28 feet long, and 6 feet 8 inches wide, that were built between 1924 and 1948. Car numbers 145 to 157 were built as new diesel cars, while the rest of the cars were converted from petrol to diesel. Refreshments were given to the attendees as the Karachi Tramway was the first steam tramway in Western India that was not only used for passenger but for freight service. In 1949 , almost two years after creation of Pakistan, the whole tramway system was sold to the Mohamedali Tramways Company (MTC) owned by Sheikh Mohammad Ali. The tram was a common mode of transport as was the horse-drawn carriage. Only the elite had cars.  The tram fare in the 1950s was only one cent. On March 14, 1966 employees of the company went on strike to press for their demands. The strike continued for four day and caused the tramway service to come to a halt. Tram ended on 30th April, 1975. The reason behind closing the tram was underground railway project planned but it never worked upon. The rails on which trams used  to run disappeared slowly and gradually.  The government sector Karachi Transport Corporation or KTC phased out due to a number of reasons, corruption and theft of parts by the employee being the major ones. The private buses and minibus then catered for increasing number of commuters. On Nov 17, 2018, a bench of Supreme Court ordered Sindh Government to bring back the tram again restoring Karachi's old glory. Ambitious plan is now being worked upon and many  foreign investors have shown interest in the project which may make it a big attraction to tourists coming to Karachi.