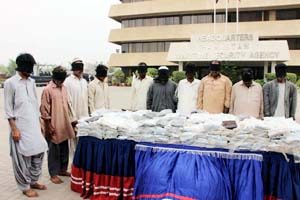 KARACHI: On the instructions of D.G PMSA Rear Admiral Jamil Akhtar, Pakistan Maritime Security Agency in coordination with Pakistan Customs Intelligence seized narcotics worth Rs1.2 billion. Authorities had information that high quality narcotics will be smuggled through international sea route. Based on this information, PMSA deployed its assets including ships and fast response boats in western maritime region. Subsequently, PMSA spotted a suspicious boat at International Maritime Boundary Line and boarded it. The crew tried to resist and some jumped into sea in an effort to escape. However, PMSA personnel exhibited immense valor and courage and overcame the situation. When boarding party of PMSA searched the boat, approximately 1.5 tons of Hashish was recovered from hidden compartments of the boat. The international market value of narcotics is Rs1.2 billion. This consignment was destined for US and European markets through East Africa. Ten smugglers were also apprehended. The narcotics and smugglers were handed over to Customs Intelligence for further investigation. DG PMSA Rear Admiral Jamil Akhtar and Director Customs Intelligence (ASO) Feroz Alam Junejo congratulated the staff for successful joint operation. This is the fourth major successful narcotics seizure by Pakistan Maritime Security Agency in last three months. PMSA in coordination with Pakistan Navy in the context of CPEC has increased presence in Makran Coastal areas to ensure effective law enforcement and crime free maritime environment.

EXPORT OF MANGO IN DEEP WATER THIS YEAR

Victoria’s Secret is closing a quarter of its stores