The Court suspended the said valuation ruling. The aforementioned motorcycle manufacturers also filed another suit before the Sindh High Court and challenged the values of OEM brand / genuine auto parts of impugned valuation ruling No. 685/2014.

The Court allowed interim release of the consignments and the cases are still sub judice . Since the valuation ruling was suspended by the High Court, therefore, this Directorate General filed an urgent application before the Court with prayer to allow the revision of V.R 685/2014 to reflect current price trend prevailing in the international market and on the grounds that the said ruling was more than two years old. The urgent application was granted and the High Court modified the Court's order and directed that the Directorate of valuation may proceed with the revision of valuation ruling in accordance with law but suspended the applicability of valuation ruling No. 685/2014 to the extent of aforementioned petitioners only . 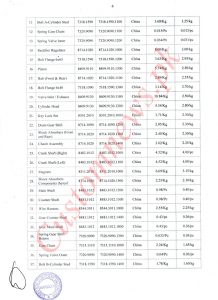 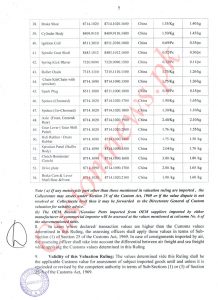