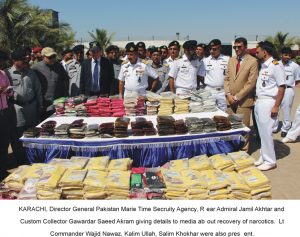 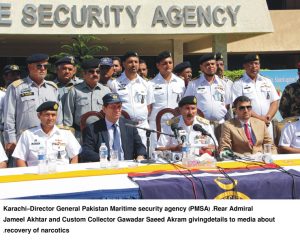 KARACHI: Pakistan Maritime Security Agency (PMSA) and Customs Preventive MCC Gwadar have apprehended over one ton of hashish worth Rs 600 million in a joint action along Pakistan-Iran border, said PMSA Director General Rear Admiral Jameel Akhtar at a press briefing at his office on Monday.

Talking to media, Akhtar said that on a tip-off, PMSA tightened security of coastal line where they saw two suspicious boats under open sky along Pak-Iran border. The PMSA’s fast response boats chased both of suspected vessels and captured one boat. The raiding team recovered high quality hashish weighing over one ton from a boat during search.

He further said that the recovered hashish had worth of Rs 600 million in international market. The narcotics have been handed over to Customs Preventive MCC Gwadar for conducting probe into the matter.

DG said that to counter enemies, PMSA will stand shoulder to shoulder with Pakistan Navy. For strengthening the security of coastal line, eight ships will be added into PMSA fleet next year, he added.

He further informed four million gallons of effluent without treatment is thrown into the sea while 8000 tons of solid waste is being released into the sea, which have harmful affects on human and marine life. He urged relevant authorities to spread awareness about this.

Talking to media, Pakistan Customs Collectorate Gwadar Collector Saeed Akram said that it was a biggest action of the PMSA. In Pakistan, PMSA and Pakistan Customs had always taken actions against culprits in the society and such kind of mutual cooperation will be continued in the future. Deputy Director General PMSA Abdul Majid, Wajid Nawaz, Imran Bhalai, Kaleemullah and Mohammad Saleem Khokhar were also present on the occasion.