There were several representations from different importers/traders and trade bodies i.e. Pakistan Chemicals and Dyes Merchants Association for determination of customs values of the chemicals. Importers claimed that the prices of subject chemicals were showing downward trend in the international market. 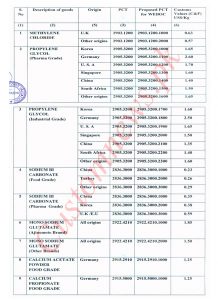