The custom values of water based acrylic type self adhesive (BOPP/OPP) and hot melt rubber based self adhesive tape in jumbo/ log or in retail packing, were earlier determined vide Valuation Ruling No 809/2016.

There were several representations from different importers and local manufacturers, for determination of customs value of the subject items. The importers have claimed that the prices of subject items are showing down ward trend in the International market hence existing valuation ruling, which is over seven months old is required to be revised in the light of High Court orders.

However, local manufacturers contended that customs values determined vide Valuation Ruling No 809/2016 was on lower side and request to enhance the customs value. Since 90 days have passed and a number of representations were received from commercial importers and local manufacturers, an exercise was initiated to re-determine the values of subject items. 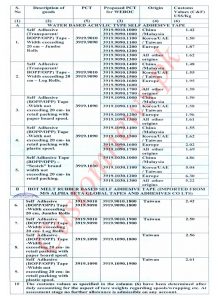