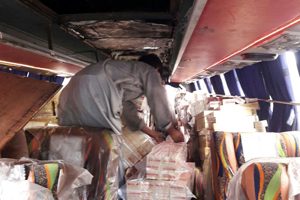 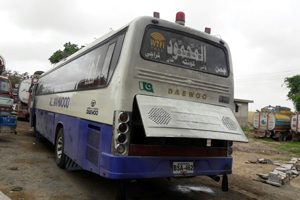 KARACHI: MCC Gwadar has foiled to bid smuggled goods and recovered foreign origin goods worth Rs5.292 million from the secret compartments of a passenger bus.

Collector Quetta Saeed Akram had received information that non duty paid goods were being smuggled from Quetta to Karachi through passenger bus.

In order to curb the menace of smuggling, the Collector directed Additional Collector Junaid Ahmed Memon to conduct the operation.

The said team remained in the field for two days and made continuous vigilance of the passenger buses on RCD Highway. As a result of such strategy, the efforts were materialized and MCC Gwadar got the vehicles after a long chase.

Driver Syed Muhammad Ali and cleaner Sardar Muhammad were arrested. After cursory search, the staff recovered huge quantity of Smuggled Foreign Origin Cigarettes, which were concealed in the specially designed cavities in the bus. Total Market value of the seized goods is Rs2.99 million. The value of passenger bus has been taken at Rs2.30 million. Under logistic support of FC Escort the bus was taken to Custom House, Gaddani.

FIR in the above case has been lodged and further investigations are underway.

MCC Gwadar on the direction of Chief Collector (Enforcement-South) Muhammad Zahid Khokhar has accelerated the anti-smuggling drive and during the month of August, 2016, 98000 liters of smuggled diesel, tyres/rugs/crockery and cigarettes etc. worth Rs12.87 million were seized.

It may be mentioned here that MCC Gwadar and MCC Quetta have almost culminated the smuggling through passenger buses.