KARACHI: US consulate has forwarded a list of numbers of 241 containers to Member Customs-FBR Nasir Masroor, which were mistakenly landed in Pakistan. US Consulate has sought permission of Pakistan Customs to re-export these containers as these were declared empty containers.

It is worth mentioning that US Consulate had submitted a declaration before Supreme Court during the proceedings of NATO containers pilferage case that not a single of their container had ever gone missing or pilfered. And, after the authorities found hundreds of empty containers along with supplies dumped in Pakistan, US Consulate has come up with a list of 241 containers, which was frustrated cargo.

Supreme Court had taken a suo moto action in reports that thousands of US Army/NATO/ISAF cargo containers destined for Afghanistan were pilfered in Pakistan. Social media is flooded with photos and footages of roadside shops in Khyber Pakhtunkhawa (KPK) and Balochistan selling US military equipment.

There are unofficial reports that narcotics, explosives and arms were pilfered into the hands of terrorists and anti-social elements. Some hardliners suggest that miscreants were even provided with funds through this pilferage scheme.

It is said that the pilfered military equipment and other goods including radio-active substances were transported to the port city of Karachi also and KPK-based and Balochistan-based fruit vendors in Karachi are said to be the transporters and even distributors of this pilfered stuff.

There are hundreds of US Army/NATO/ISAF containers found dumped at various places in Pakistan including those the numbers of which provided by US consulate, and documentation/evidence only pertaining to their arrival in Pakistan are available, while there is no documentation/evidence that these containers went to Afghanistan and then they returned from there, a Member-FBR told Customnews.pk. Further investigations are underway in this regard.

The member said FBR was in a difficult spot at the moment as the Customs General Order No. 10 (CGO-10) provides that focal person of US Consulate would be responsible for the pilferage/theft of US Army cargo, while Constitution provides immunity to diplomatic missions.

Member FBR said the board was under severe pressure and had not been able to take necessary action despite of the fact that hundreds of empty US army containers were found at warehouses, Directorate of Transit Trade and Directorate of Intelligence & Investigation found several containers while being emptied in Pakistan even containers declared to be hazmat waste were found stuffed with cement blocks.

Member FBR said investigating this issue was not within the mandate of FBR alone and a joint task force including Ministry of Defense and Ministry of Foreign Affairs among others would be in a better position to investigate this high profile case.

The list of numbers of containers provided by US Consulate: 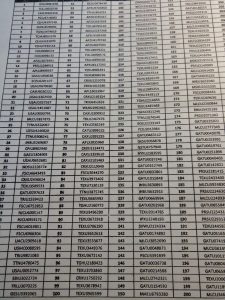 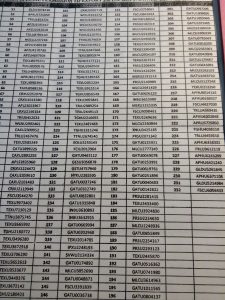