The custom values of chemicals including Iso-propyl Alcohol, N-Propanol, Cyclohezanone, Ethoxylated Nonyl Phenol, Iso Butanol, N-Butanol and Phenol were earlier determined vide Valuation Ruling No 793/2016, which gave valuation of imports of chemicals in drums packing only and it did not cover the chemicals imported vide ISO tanks or in Bulk-form.

Several representations from different traders and trade bodies i.e. Pakistan Chemicals and Dyes Merchants Association (PCDMA) were received for determination of customs value of chemicals imported in bulk vessels and in ISO-tanks as well.

Moreover the importers have claimed that the prices of subject chemicals are showing down ward trend in the International market. 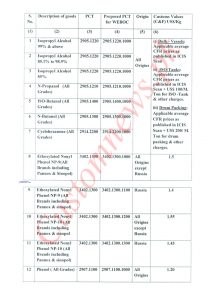