KARACHI: The new valuation ruling (VR) 917/2016 for determining Custom values of Soft and Hard Sawn Wood was issued by the Directorate General of Customs Valuation, The new VR replaced VR 671 of 2014.

Citing the reason for new VR, Dr. Wasif Memon, Director Custom Valuation maintained that previous VR was considerably old and also the SHC while deciding a constitution petition (CP-D 6918.2015) has ordered issuance of new ruling after expiry of period of 90 days.

All the stakeholders including Karachi Timber Merchants Group were taken on board and sequential method was applied as per requirement of the law (section 25) for issuance of the new VR.

According to new VR the Soft and Hard Sawn Wood would be classified under main PCT heading 4403.2000. The detailed chart is as under: 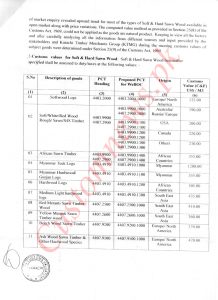