Ahmad Raza of M/s DIC Pakistan Ltd producing offset printing inks submitted that yellow, magenta, cyan and black are four major colors which constitutes around 75-80 percent of the volume (called process colors). The others are spot colors and made from these four colors. In the four basic colors the increase in value is around 18 percent whereas increase in lemon Yellow is 5.0 percent, bronze Red 2.0 percent and in other colors is between 2 to 7 percent.

If these prices increased on the basis of raw material their prices should have been increased by equal margins.

The company representative challenged the ruling as the prices mentioned in the ruling are still very low.

After due deliberation, DG Valuation revised the Valuation Ruling No.854/2016. 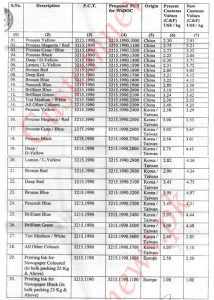