The importers were of the view that Table-A of the valuation ruling No. 869/2016 did not reflect the fair customs values in respect of given description. They further explained that in the valuation ruling values have been fixed for various description/ranges. They requested to fix value on the basis of KVA so that importers may pay duty according to capacity of the generator.

The importers also expressed its reservations against the categories (A, B & C) given in column (6) of the Table-A of the impugned valuation ruling whereby a limited number of brands are mentioned. Moreover, low end Chinese brands are mentioned in category-B instead of category-C.

The departmental was of the view that the generator of different KVA were basically categorized in order to address the under invoicing and mis-declaration.

After examining the record of the case and arguments put forward during hearing, Director General observed that the customs values determined on the basis of “set” or piece instead of KVA has created vast variation in prices/customs values, therefore, the customs values of petrol/diesel generators of Chinese origin enumerated in Table-A of valuation ruling No. 869/2016 are determined on the basis of ‘KVA’ instead of ‘Set’ or piece in order to levy the legitimate duty and taxes on the true declaration.

The values in the ruling are hereby replaced with the following: 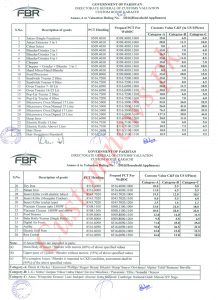