The Customs Appellate Tribunal set aside the said valuation ruling to the extent of the Appellants on the grounds that sequential order was not followed; the importers were not given proper opportunity of hearing and participation; the stakeholders were not made part of the market survey and that Valuation Ruling pertaining to aerosoft shoes/ sandals, which was higher value item, had not been revised simultaneously; thus being detrimental to the interests of the importers of low end brand shoes etc from China and directed that the Directorate General of Customs Valuation re-determine the customs values.

Thereafter, a reference was filed against the order of the Appellate Tribunal in High Court of Sindh, Karachi mainly on the grounds that the previous ruling was issued after due deliberations and proper procedures and that a fresh ruling of Thailand origin aerosoft brand shoes / sandals had been issued vide 872/2016.

Since the previous market inquiry of low end brand shoes / sandals etc had been conducted close to the Eid-ul-Fitr, it was deemed expedient to re-determine the Customs values so as to ensure that no price hike had affected the survey. Based on the above an exercise was undertaken to re-determine the Customs Values of low-end brand Shoes, Slippers, Sandals, Chappals and Joggers afresh.

However, input of importers was taken on every step to ascertain the locations, wholesale markets in the city for such a market survey. Meanwhile, when the values were being determined they requested to hold another meeting or defer the ruling which was not possible specifically in the light of limitation granted by the Appellate Tribunal order of one month. 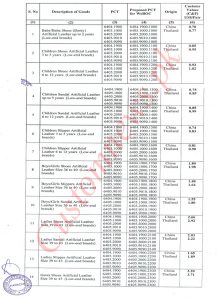 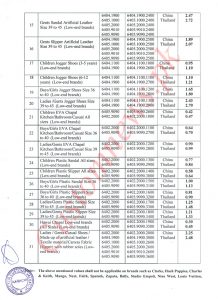