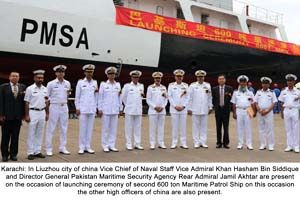 CHINA: The launching ceremony of second Maritime Patrol Ship BASOL for PMSA was held at Liuzhou city, in Guanghi Province of CHINA. This was second ship of its class that has been launched and is three months ahead of the scheduled timeline.

The launching ceremony was graced by Vice Admiral Khan Hasham Bin Saddique HI(M) Vice Chief of the Naval Staff as a Chief Guest. The other high dignitaries from PMSA, CSTC and shipyard were also present at the occasion. Vice Chief of Naval Staff in his address praised PMSA, M/s CSTC and officials of all the stakeholders for early completion of an important project milestone and emphasized on continuing cooperation between Pakistan and China at all level including the maritime building sector.

He showed his satisfaction that the maritime sector projects being jointly under taken by both the friendly nations have become yet an other source of strength to enhanced the security cooperation between two countries which will auger well for the entire maritime region of interest.

He also highlighted this maritime security cooperation between Pakistan and China is not only for peace and stability of the region but even beyond. He mentioned that capability enhancement of PMSA is also now essential to secure area of Gwadar due enhanced responsibilities vis-a- vis CPEC. Elaborating further, he stated that both Pakistan Navy and PMSA have already established comprehensive mechanism for ensuring security of Gwadar Port and surrounding sea areas.

Availability of latest ships to PMSA will further secure our sea against all crimes including terrorism. It may be mentioned that Ministry of Defence Production under PSDP programme signed a contract with M/s CSTC of China for construction of 4 x 600 Tons and 2 x 1500 Tons Maritime Patrol Ships in June 2015. As per the contract, four ships are being constructed in China while remaining two ships, one of each type, are being constructed at Karachi Shipyard and Engineering Works.

Acquisition of these ships by PMSA will augment its capabilities manifold to enable it to protect Pakistan’s Maritime Zones and ports/harbours all along the coast. Pakistan Navy’s Marines, PMSA vessels and personnel are presently engaged in guarding all sea port as well as escorting and providing complete protection to critical LNG supplies at Port Qasim. Unprecedented increase in maritime activity and contemporary threats/ challenges in maritime areas warrant further enhancement in capability of PN and PMSA not only to counter threats against traditional challenges but also asymmetric threats particularly those being sponsored and perpetrated by our traditional enemies, Pakistan China collaboration has the potential to face the challenges and further enhance cooperation for indigenous ship construction industry.

Vice Chief of the Naval Staff commended and acknowledged the efforts of PMSA for enforcement of State writ in vast expenses of sea areas of Pakistan. The impending addition of Maritime Patrol Ship in near future will go a long way in addressing capability gaps. He appreciated workmanship of Chinese shipyard and PMSA/Mission team for quality and achieving the milestone three month ahead of the schedule. Director General Pakistan Maritime Security Agency Rear Admiral Jamil Akhtar HI(M), T.Bt. also attended the ceremony.