KARACHI: The transfers, postings and adjustment of Pakistan Customs Service (PCS) will be delayed and it is expected that officers would be given OPS charge. Chairman FBR is leaving for USA on Sunday, and the detailed transfers and adjustment would be notified following his return.

Member Customs Nasir Masroor has returned from Tajikistan and held meeting with Chairman FBR Nisar Mohammad Khan on Friday. The meetings discussed transfers and postings of PCS officers. There are four lots of PCS officers who need postings include those who have returned from diplomatic missions abroad and posts of those officers need to be filled  who will be leaving on such missions. Moreover, officers returning from management courses will need postings and posts of those officers going on such courses will need to be filled.

The transfers and postings of PCS officers got delayed because the IB NOC of few officers were not timely received. Notable offices being vacated include Collector MCC Preventive as Tariq Huda is going on management course. Office of Collector Adjudication –I will be vacated as Basit Chaudry is going on a year leave. Office of Mohammad Saleem Director Islamabad will also be vacated.

Meanwhile, the transfers and postings of Inland Revenue Service (IRS) officers is completed, which is as under: 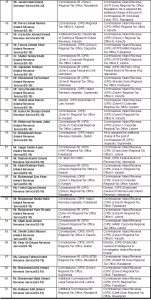