KARACHI: The judges of High Court of Sindh in a rare full court meeting held Thursday at SHC in a rare demand asked Prime Minister and President to enhance security of judges and their family members.

The move was initiated by senior most judges available at Principal seat, Karachi and 20 judges attended the full court meeting which took stock of the situation after abduction of Barrister Ovais Ali Shah, son of Chief Justice of SHC Justice Sajjad Ali Shah.

The incident was aimed at hampering the dispensation of justice and shows that judges and their families are exposed to any untoward incident which may shake the confidence of the people of the country, an official press release issued by the Registrar SHC late Thursday evening said.

The meeting noted with concern the failure of law enforcing agencies and urged the provincial as well as federal government and agencies to ensure safe recovery of Barrister Ovais Ali Shah.

The meeting noted that a petition has been filed by Sindh High Court Bar Association (SHCBA) before Supreme Court of Pakistan and decided to wait for the outcome of the same.

The full court meeting deferred further course of action till its next meeting.

Earlier hundreds of cases including one by super model Ayyan Ali were adjourned Thursday as judges and lawyers both stayed away from court. However a single judge heard some cases.

Later lawyers who boycotted court proceedings for the day met at Karachi Bar Association. These include KBA, Malir Bar, SHCBA, Sindh Bar Council and discussed the issue of abduction of Ovais Shah.  The meeting however deferred decisions till Saturday in view of Supreme Court’s hearing of Karachi Lawlessness case on Friday.

Ovais Ali Shah was abducted 24 days back when he came out of a super market in posh Clifton area. He was forcibly taken away by men riding a car with police number plate which was later found fake. No clue was found and neither any call for ransom was received, Police claims and believe that Ovais Shah still is detained somewhere in Karachi . 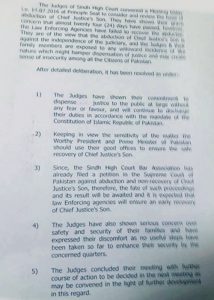